Everybody was Kung Fu Fighting!  At least in the mid 90s they were.  From big publishers to small, everyone wanted a piece of the fighting game pie.  While some like SNK were able to make an entire cottage industry out of it (seriously, if you like fighting games the Neo Geo is an all you can eat buffet) most were simply ill equipped to make a decent stab at the genre.  In 1993 Konami chose to use their Ninja Turtles license to create 3 wildly different games for 3 platforms, which brings us to this Genesis version.  How does it fare?

Evil clones of the Ninja Turtles have kidnapped Splinter and taken him to Dimension X.  With no other choice the brothers set off in pursuit and bring April O’Neil, Casey Jones, Ray Fillet, and Sisyphus along as backup.  Based on the original Mirage comic book this version is darker in tone and as such truer to the franchise’s original incarnation.  While the attempt at differentiating this version is successful it fails in the most important aspect a fighting game needs: controls.  There’s a wealth of options to explore but if the game isn’t fun to play all of it is useless.

The 4 Turtles bring their signature weapons to the party and as expected utilize them in their special moves.  This ain’t your daddy’s April O’Neil however.  Able to kick butt with the best of them erase any thoughts of the useless damsel in distress from the cartoon.  Casey Jones…….I don’t need to say anything about.  It’s a dude with a hockey mask and sports equipment kicking ass, it speaks for itself. 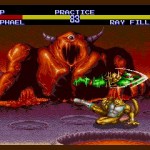 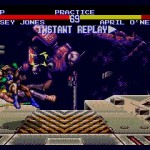 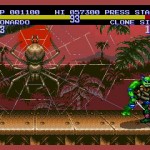 You’re probably wondering who the hell are Ray Fillet and Sisyphus at this point.  In addition to the Mirage comic there was a second series published by Archie Comics, a series that first adapted the cartoon episodes but later created its own continuity.  More serious than the cartoon but not as adult as the Mirage series it introduced a large range of characters that were later added to the cartoon series and some of the games.  Regardless they do bring something different to the table although I’m sure most would have preferred some of the more popular characters instead like Bebop and Rocksteady.  8 characters is a small roster for a fighting game in 1993 but unfortunately the game has bigger problems than that.

Let’s start with the controls.  The six button controller had not seen release yet so gamers were stuck with the default 3 button pads.  3 buttons is adequate but not ideal for a fighting game however the 3rd button for whatever reason is used to taunt.  This wouldn’t be an issue if it weren’t for the fact that stronger attacks are performed by awkwardly pressing forward and attack at the same time.  Further frustration comes from the imprecise button commands.  Special moves are performed with a variety of inputs, from Street Fighter style half circle motions to Mortal Kombat’s simplified Forward, Back, Forward and such which is fine but executing most moves is an exercise in frustration.  Forget about creating any kind of combo’s as well; nearly all hits result in a knockdown or grant a second of invulnerability.  It feels more like a beat em up than a fighting game engine.

It’s a damn shame that the moves are so imprecise because you’ll need every edge possible to beat the vicious computer AI.  Make a mistake and you’ll surely pay for it due to the overly high damage ratios.  And it doesn’t let up either.  I highly doubt anyone will have the patience to complete the single player mode because it’s so unbalanced.  For anyone who has played Eternal Champions, this is one the same level.  If the controls were adequate at least you’d stand a fighting chance but that just isn’t the case.  There’s a wealth of modes and options to explore but when the core of the game is so broken only the staunchest gamers will stick with it.

By staying closer to its comic book roots the Genesis version of Tournament Fighter is suitably dark and meshes with the console’s strengths pretty well.  Each planet of Dimension X is distinct, with exquisite background detail.  The animation is almost to the same level but there are some weird pauses in between frames.  While the soundtrack isn’t memorable the voices are clearer than normal for a Genesis game.

Too bad the fighting engine is broken because otherwise this version of Tournament Fighters has some of the best production values for a Genesis fighting game.  The SNES version is the way to go if you want to experience Turtle fighting action.