For a long time licensed comic book games sucked horribly.  This never made much sense to me.  How hard can it be to take the action depicted on the colored page and spin that into gaming greatness?  Apparently too hard seeing as how 90% of them were terrible.  I should preface this by saying most of those games were made by Acclaim but the point still stands.  The X-Men especially could not catch a break, starting with the absolutely dreadful game for NES.    Sega however were one of the first to treat the license with respect in creating this game so let’s see how it holds up nearly 20 years later.

X-Men was released by Sega in 1993. A virus has infected the Danger Room, releasing the safety controls and creating random dangerous environments.  It’s up to the X-Men to brave each scenario and eliminate the virus from each to unveil the mastermind behind it.  Fan favorites Gambit, Nightcrawler, Cyclops, and of course Wolverine are the playable leads with a cornucopia of cameo appearances from the comics.  Next to the Konami arcade game this was one of the few respectable games starring these characters and while the problems that plagued it back then is still annoying it’s still an enjoyable title. 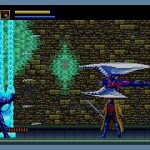 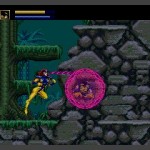 The game makes heavy use of its license to great effect.  Each character has a standard set of melee attacks complemented by their unique mutant powers governed by a mutant power bar.  Cyclops optic blasts not only allow him to attack from long range but also rebound his blasts while   Gambit’s playing cards track enemies. Wolverine’s claws enhance his attack strength but his most useful ability is his healing factor which makes him the proverbial tank of the group.  Nightcrawler might be the useful of the bunch since his ability to teleport is potentially game breaking in parts.

If 2-player coop isn’t cutting it you can call in your teammates for help.  4 additional X-Men (Rogue, Iceman, Archangel, and Storm) can be summoned for assistance while Jean Grey will save your ass from bottomless pits for a little health.  Iceman will create bridges to cross gaps; Archangel will make 3 passes and attack whatever is in his line of sight.  Storm and Rogue serve the same purpose, however whereas Storm will hit all enemies Rogue only attacks one, useful during boss battles.

Setting the game in the danger room allowed Sega the opportunity to explore a number of different environments.  For any fan of the comics these locations will be instantly familiar, such as the Savage Land, the Shiar Empire, London, etc.  The levels are non linear and spacious, giving you ample opportunity to look for power-ups.  There is no one set route to the end and exploiting certain abilities like teleportation could potentially allow you to skip bothersome areas.  The bosses will bring a smile to your face as they are a virtual who’s who of the X-Men rogue’s gallery.  Sabretooth, Juggernaut, Magneto, even lesser known characters like Deathbird make an appearance.

The major flaw holding the game back is the difficulty.  You only have your 4 dudes and that’s it.  No continues, no passwords, no battery backup.  This isn’t a long game by any stretch however it is disingenuous to have to start at the beginning due to the insane amount of cheap hits that lead to quick deaths.  You really have to comb through the levels for extra health since they are in short supply, so more than likely you will make excessive use of switching characters out.  Wolverine is invaluable because of his healing factor for this reason so protect that mofo.

The other problem and this was stupid back then too, is that to access the final level you have to reset the Genesis when the game prompts you to “reset” the computer.  You read that right.  You had a few second window to do this; if you held the reset button too long you would really reset the entire game.  Trust me, if you soldiered through to that point only to fuck it up because some ass hat thought it would be cool to reset your console to progress you might just chuck the cartridge out the window.

The graphics aren’t as nice as I remember and the difficulty is a bit insane nonetheless X-Men has aged gracefully.  It isn’t at the top of the X-Men game heap anymore but is still fun for a few hours and it paved the way for the much better X-Men 2.