Man oh man where do I even begin?  The Double Dragon games have always been enjoyable beat em ups despite the problems each game had.  In some circles it is looked at as one of the classic franchises of the 80s.  Double Dragon 3 in all its forms was a wretched game, and while the NES version isn’t as bad as the arcade game that’s like saying a toilet plunger in the ass is better than a soldering iron.  You’re better off avoiding the game in all of its forms.

Bimmy and Jimmy.  That first screen should give you an idea how little they cared about this game.

Double Dragon 3: the Sacred Stones was released in 1990 for the NES and was an original effort separate from the money grubbing arcade game.  This would have been the perfect opportunity to trounce the insipid arcade game but somehow Technos created a game just as bad.  Loosely following the same plot as the arcade, Billy and Jimmy Lee are called to action once again as Marian has been kidnapped again.  A fortune teller named Hiruko tells them of the 3 Sacred Stones needed to rescue her, sending them on a worldwide hunt.  Double Dragon 3 introduces a few new elements to the series that would have made for an enjoyable thrill ride but ultimately fails in terms of execution.

If you are familiar with any prior game in the series you can hit the ground running.  Most of the moves from the second game have been carried over and now you have some sweet additions.  You can now dash which leads into a new move that allows you to flip and throw enemies.  The awkward reverse attack button has been removed thankfully but you still have to press both buttons to jump.  Although you don’t have a stock of lives, 2 of the bosses become playable characters once defeated and fulfill the same role.  These two characters have their own move sets that will help or hinder your progress.  The game is shorter than Double Dragon 2 at only five missions; you’ll thank god for its brevity since the gameplay is god awful.

To some degree all of the Double Dragon games have had difficult to perform moves; here you’ll almost never truly feel in control.  With the exception of the basic punches and kicks every other move seems to execute at random.  The “level” themselves don’t fare any better.  Nearly every mission consists of at most 2 screens with a never ending supply of the same 2-3 thugs before you move on. Attack priority has always been infuriating in this series and now it’s worse, with the standard enemies able to trap you in a stream of stuns with no escape.  Did anyone play test this before sending it out the door? 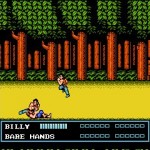 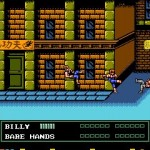 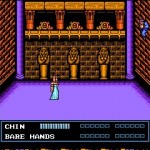 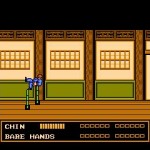 On the one hand the terrible platforming that ruined the last 3 levels of Double Dragon 2 has been relegated to the last mission but it still has no place in these games when combined with the awful controls.  About the only positive I can mention are the other controllable characters.  Much like TMNT, they each have their own life bar and can be switched out at will, and generally you’ll prefer to use them to the Lee brothers.  Classic gaming at its finest this is not.

I don’t normally go into these reviews with the intention to rip some poor game a new ass.  But sometimes I have to call it like I see it.  In the pantheon of old games this isn’t fit to beg for table scraps.  Super Double Dragon redeemed the series and is a far better classic game.