I’ve always been a sucker for Greek mythology.  Whenever the topic came up in history class it was my favorite time of the day.  Naturally it makes for excellent video game source material and as such there have been a wide range of spins on the subject.  From the God of War series to Titan Quest, games have used the established lore to build unique game experiences.  Even unrelated products like Final Fantasy have used bits and pieces of the mythology to flesh out their world.  Kid Icarus was my first taste of this but that was merely an appetizer compared to Battle of Olympus.

Battle of Olympus was released in 1990 by Broderbund.  Loosely based on the story of Orpheus and Eurydice, Orpheus bride Helene is poisoned by a snake and taken to the underworld to be Hades bride instead.  Orpheus begins his journey to save Helene with a little godly assistance along the way.  I love action RPGS so following Zelda 2 this was just what I needed to scratch that itch. 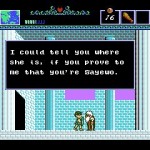 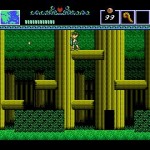 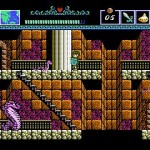 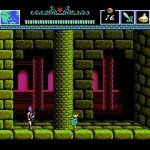 The closest comparison to Battle of Olympus would be Zelda 2.  They both share the same basic game structure minus the overworld map.  After visiting Zeus, your job is to then seek out the other gods in order to receive new items that will allow you to further progress into later parts of the world and ultimately save the girl.  You have free reign to visit any location and can collect items out of order provided you don’t mind getting your ass kicked in the process.  The citizens of Greece are found everywhere and will generally tell you where you need to look for particular items and such.  A lot of them are intentionally vague, and looking back I can’t believe I figured out some of this stuff when I was a snot nosed 10 year old.

There are a wide range of items to collect and I got a kick out of meeting each god to see what particular item I would receive, since most of them are all pulled from myth.  In addition to that, I found the uses for some of the items to be pretty clever, such as being able to walk on ceilings using the Sandals or using the Harp to negate Siren’s voice.  You are taken to a vast array of locales round Greece as you collect the numerous tools necessary to find the 3 nymphs who will give you the power to enter Hades.  Unlike the Zelda series, there aren’t necessarily dungeons per se; most of the different countries you’ll visit would fill that quota if you want to look at them that way. 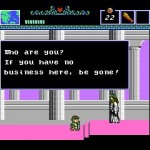 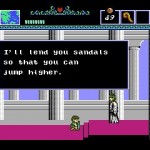 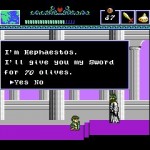 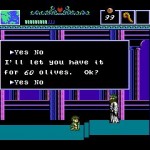 Greedy bastards.  Who knew the Gods could be such dicks?

The game is steeped in Greek lore, as all the locations you visit are pulled from Greece.  The items as I mentioned are also popular items from mythology such as the golden apples and even the Staff of Fennel to an extent.  Many of the bosses you fight also come from the lore, like the Siren and the Cyclops.  As you play the game it sometimes feels like you’re getting a history lesson but in a good way.  This is how you make use of a “license”.

Replaying the game, I remembered some of my complaints and they still ring true today.  The clues as to where you should go the majority of the time are very vague.  I realize this was pretty common in the 8-bit era but it doesn’t make it right.  Another that was also common, you lose half of your money when you die, and all it takes is one misplaced jump or sudden off screen enemy to cause that to happen.  I was ecstatic when developers moved away from this at the latter stages of the 16-bit era.  The game can be very brutal with bosses taking large chunks of health with every hit.  This last one is my own personal pet peeve but passwords in the 8-bit era were like playing Russian roulette.  They all seemed to use the same font, with O’s and 0’s looking exactly the same along with L’s and I’s and B’s and 8’s.  I never owned Battle of Olympus myself back then; it was my next door neighbor’s game, and whenever I would use it my password was guaranteed to never work or I had lost it.

All in all, would I still recommend the game? Yes but with the caveat that you know what you’re getting yourself into in terms of its issues.  Many of them were common back then, but even looking at them through nostalgia goggles doesn’t change the fact that they are frustrating.  But if you are clamoring for an action adventure in the Zelda mold you could do worse.