At what point does a clone cross the line? While the industry is more or less built on the back of clones, it’s a shame when a game very callously follows in the footsteps of another.  But at the same time, clones are great in that they give you a taste of the same gameplay you love without having to suffer the wait for a sequel.  Sometimes though imitation goes a little too far and the product suffers as a result. Case in point: Rapid Reload.

Released in 1995 in Japan as Gunner’s Heaven and Europe as Rapid Reload, curiously it never saw the light of day in America. Common theory is that Sony Computer Entertainment America actively limited the amount of 2d games released in the states because they didn’t properly show off the system’s power. More than likely we’ll never really know. When treasure hunters Axel Sonics and Ruka Hetfield hear of a legendary treasure called the Valkiry, they set out in pursuit and run afoul of the Pumpkin Head gang who are also seeking its power. From there the hijinks ensue.

You control either character (their weapons function slightly differently) in single player action across 6 levels that will take you from the jungle, a military train to the Pumpkins Head’s hideout. The action is nonstop as you plow through the enemy forces with your choice of 4 different weapons you can switch between at any given time. As a bonus, you start with all 4 from the beginning. You also have a grappling hook and can collect smart bombs for screen clearing destruction. By collecting P-Crystals that are dropped by enemies you build up a boost meter that increases your attack power while simultaneously counting down.  Occasionally when it reaches 100% it will (what else) boost the power of all your weapons to a ridiculous degree for a short period of time.

The game is seriously pretty.  This is what we expected 32-bit 2-d games to look like.  Too bad there weren’t more of them.

With nary a polygon in sight the graphics are extremely detailed with excellent animation and a very wide color palette. No two levels look alike; this is pure hand drawn art on display here. A lot of the special effects literally pop off the screen and it isn’t uncommon for the entire playing field to be lit up in one massive pyrotechnic display. The bosses are the biggest sign that this is a 32-bit game as they usually take up the entire screen and fill nearly every inch of the space with their attacks. Though not as numerous as some of its contemporaries the bosses are definitely the highlight of the game graphically.

The difficulty is tuned to near perfection with every level steadily ramping up in challenge.  If you love deciphering boss patterns and using that knowledge to destroy your enemies unscathed you will be in (heh)heaven.  So why label this a clone? Because it’s all been done before.

Pure 2-d action at its finest.

Now when I say that I don’t mean in terms of gameplay. Run and gun action games are a dime a dozen. I mean almost every feature the game has comes from Gunstar Heroes. Rapid Reload doesn’t have an original bone in its body. Your weapons? Carbon copies of the Gunstar arsenal. Standard pea shooter? Check. Heat seeking lightning? Sure why not. Slow but powerful fire? You bet your ass. The animations of your main characters are even similar. The features it has over Gunstar Heroes don’t amount to much in the grand scheme. The grappling hook is never necessary, and honestly if I didn’t occasionally hit that button by accident I would forget it’s in the game. The boost mechanic doesn’t last long enough to make a difference, and generally you’ll activate when it’s not even necessary.

Hell some of the levels and bosses even look directly lifted from Treasure’s classic. There’s nothing inherently wrong with copying from one of the best, but Christ don’t be so blatant about it. The game fires on all cylinders when it does its own thing but peters out when you start to see the Treasure influence creep in a little too close for comfort.  Why does any of this matter? Because the game doesn’t have an identity of its own, the experience as a whole suffers. Everything it does it does extremely well.  It just comes across as a retread because it apes its inspiration so closely. You can’t help but feel like you’ve seen it all before. 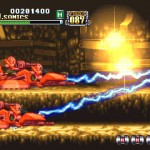 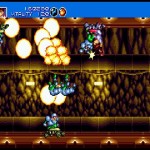 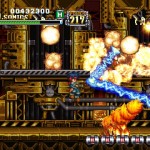 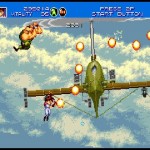 Rapid Reload on the left, Gunstar on the right.  I’m surprised they didn’t get sued for this.

In the end that is Rapid Reload’s only real crime. Truth be told at the tail end of the 16-bit generation we all imagined what the next Contra’s and platformers would like look. This game fulfills that dream; too bad it was a rare sight, being an otherwise excellent action game at a time when everyone was losing their shit over 3d. Look past your feelings of déjà vu and you’ll be rewarded with a seminal game in the Contra mold. Lord knows Konami was too busy fucking up that franchise to say otherwise.