Whatever happened to Caveman video games?  It’s a weird tangent to start on but at one point there were an assortment of Neanderthal heroes across the video game landscape, protecting us from the animal mascot menace.  The likes of Chuck Rock, Bonk, Big Nose the Caveman, and even puzzle games like the Humans were all able to flourish, than one day it seems the industry decided to evolve (heh) and move on.  What a shame, as games like Joe & Mac were extraordinary and offered something different. 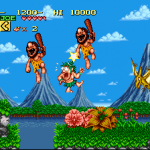 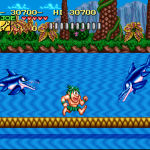 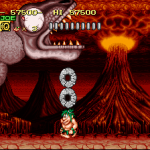 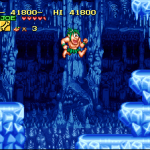 Joe & Mac was originally released in arcades in 1991, with a deluge of ports to follow.  You control Joe or Mac, the Caveman Ninjas of the story (I guess it sounded cool to someone) in your quest to save all the cavewomen who have been kidnapped by rival cavemen.  A simple story for simple times.  While not original, Joe & Mac was an enjoyable action romp in the style of Contra and although it isn’t as great as it once was still remains a pleasant ride from start to finish.

In one or two player co-op you control our Caveman heroes in numerous levels of prehistoric action.  The Bonk series would be the closest comparison as many of the same gameplay elements are present here and they even share a similar art style.  Christ, now that I think about it they even feature levels which have you swimming inside a dinosaur’s stomach.  The similarities end there however.  Joe and Mac are equipped with clubs initially which can be upgraded to axes, boomerangs, a wheel and fire.  Collecting multiples of the same weapon upgrades it even further turning you into a walking death machine.

Food is in abundance to replenish health much like Bonk and you are equipped with a generously lengthy life bar.  Overall the game is fairly easy with very few tricky points aside from the screen filling bosses.  You resurrect exactly where you died and extra lives are in abundance.  Part of that ease of difficulty comes from the changes made for the home versions.

The arcade version featured many elements conducive to that experience.  Your life bar constantly ticked down even when idle and forced you to stay on the move.  Enemies hit harder but only required a single hit to kill and any deaths resulted in a boot to the last checkpoint.  Hey, you have to keep those quarters flowing somehow, you know?  Among the various ports the Genesis game is the most accurate gameplay wise, with the removal of lost health over time the only concession.

The SNES game on the surface seems arcade perfect and generally looks the part.  However it feels more like a remake.  A Super Mario World style overworld map has been added to keep track of progress, more bonus stages dot the levels, and the levels have been lengthened even though they still feel a bit short.  Contrasting these additions is a large quantity of features that have been removed.  The weapon selection has been halved, with some of the cooler power-ups such as fire breath and shadow clones now gone.  Enemy health has been bumped up, which sucks when the pathetic club is your only weapon at the worst moments.  A new final boss has been added but unfortunately he pales in comparison to the original.

Even despite the years that have passed Joe & Mac remains reasonably fun.  It’s worth it to try out the SNES game as it’s a different experience and some of the changes work out for the better.  If you want to play the original arcade game a perfect port exists on the Data East Classics collection for Wii, so you don’t have to deal with the Genesis’ weaker production values.  Either way Joe & Mac will kill a few hours and show you a good time.

Wait a second, I’ve saved you 3 times now!  You’re not really being kidnapped are you………….