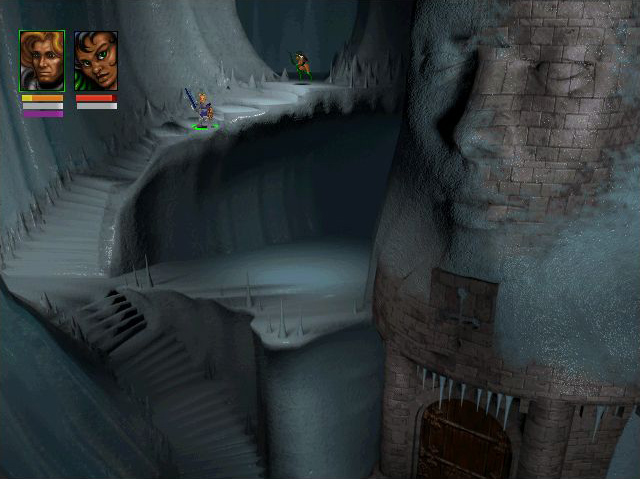 These days what was once considered a strictly PC style RPG has now become the norm with turn based Japanese RPGS retreating to handhelds.  But back in the late 90s or so it was the exact opposite; Final Fantasy and its ilk were at their peak and heavily PC centric games like Diablo and Deus Ex receiving console ports was a rarity.  While Eidos ported both Final Fantasy VII & VIII to PC original console style games for that market were extremely limited which made Silver stand out.  Silver was then ported back to the Dreamcast and you can make the case that this is where it probably belonged but it has its flaws that keep it from reaching the peaks of the games it emulates.

In the land of Jarrah the sorcerer Silver is the ruler.  One day Silver decides he needs a bride and orders all the women in the kingdom brought before him to make his selection.  This does not go over well with the male folk but none are brave enough to fight back except David, who had settled in to the married life with his wife Jennifer. With his grandfather at his side and an eventual band of companions David sets out to stop save Silver and rescue his wife.

The story while at first interesting eventually devolves into the same clichéd tripe that has plagued traditional Japanese RPGS for years.  What starts out as a simple rescue eventually turns into a quest to save the world as Silver has made a pact with the demon Apocalypse for power and eight orbs are needed to stop him.  At least it’s decently acted; all dialogue is fully voiced and the actors do a very good job emoting with very few qualifying as terrible.

Aside from its storytelling tropes Silver uses polygonal characters placed over pre-rendered backgrounds for exploration.  Important areas such as hotspots, items of interest, and paths can be highlighted by holding L, a feature that is leaned on too heavily as a sizable number of the backdrops were poorly designed in terms of navigation.  The game also has a propensity for poor camera angles, with wide establishing shots used to give a sense of scale and enormity to the environments that lead to your characters being reduced to small hard to see blobs amidst the splendor.  Enemy placement in these situations is suspect and trying to ascertain what the hell you’re even doing when the onscreen elements are so distant is a nightmare.

Silver uses a real time combat system as David is armed with an array of attacks depending on the currently equipped weapon.  By holding R and manipulating the analog stick you can unleash a variety of slashes that look cool but are kind of useless.  There’s no way to lock on to a target so you end up flailing about like a moron.  Their attack animations are also too long and it’s much more effective to simply rush in and go wild with the default attack.  Eventually you’ll have a party of up to three characters that you can switch between at any time.  It becomes mandatory as the AI can’t make up its mind whether to assist in attacking or stand around doing nothing.  You can only give the most rudimentary of commands such as how long they should attack but in most cases if it’s not a ranged attack they won’t listen.  You get the sense that the designers were aware of this as health restoring practically rains down from the heavens to compensate for you doing all the work.

Accessing the many items, weapons, and armor you’ll amass is done through a Secret of Mana style pie menu with everything from magic and food to weapons and armor given its own slot.  It makes switching equipment and such very snappy although it can get bogged down with menus buried within other menus.  It frees you up to focus on combat of which there is plenty.  Although simple in design enemies can swarm in groups of up to a dozen or more, something rarely seen on earlier hardware.  Although Silver is derivative in its features the pacing of the quest is pretty brisk.  The eventual search for the eight orbs bucks most trends as some are in plain sight waiting to be discovered while others are simply given away after conversing.  When the time ultimately comes for dungeon exploration for the most part they’re usually average in length.  All in all Silver lasts a decent 15-20 hours and never feels as if it has overstayed its welcome which is respectable.

The prerendered backgrounds are at higher resolution than most were accustomed to on the PlayStation where it was so prevalent.  The added clarity gives the game a sharp look but it lacks Square’s amazing art direction.  There’s a great deal of variety in the set pieces you’ll visit around the world of Jarrah and even the standard tropes such as forests, fiery landscapes, and wintery landscapes manage to have an air of originality to them.   The polygonal models are the game’s weakest link and look as though they were taken straight out of a PlayStation or Saturn game.  The lack of complexity allows the game to flood the screen with them but the Dreamcast could definitely handle more.

Silver isn’t a bad game but it merely feels adequate.  All of the elements that it has borrowed from more storied franchises are not up to their same level of quality leaving a game that struggles to be more than the sum of its parts.