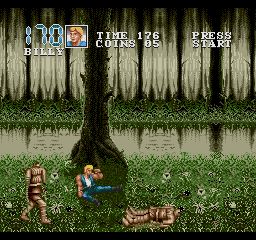 This is truly, truly terrible.  Double Dragon 3 in all of its various incarnations is a bad game and somehow this Genesis port of the arcade game is the worst of all of them.  My mind is boggled at how any decent human being could release this in the state it’s in.  As much as I ragged on the NES game at least it was playable.  This POS is not.

Double Dragon 3 was released in the arcade in 1991 and ported to the Genesis in 1993.  Billy and Jimmy Lee are returning from training around the world when they meet a fortune teller who informs them that finding the 3 Rosetta stones will allow them to face a strong opponent.  The story is more or less the same as the NES game, if only the rest were the same but better.

Things are a bit different this time.  Almost all of the special moves introduced in Double Dragon 2 have been removed, leaving you with simple punches and kicks.  A few new ones replace the overpowered uppercut and flying knee, such as the running head butt and belly to back throw.  You start with 15 coins that have various uses.  As Billy or Jimmy you have one life.  You can use your coins to purchase new moves, extra health, and extra lives.  These extra lives take the form of different characters with their own move sets.  It isn’t advisable to spend all of your coins since they also function as continues.  The worldwide journey for the stones will take you to various locales with appropriate enemies to match.  You can’t say they didn’t’ try.

It all falls apart when it comes to combat.  The controls are unresponsive and executing special moves is random; you’ll never feel as though your actions are under your control.  But the main culprit is the hit detection.  Your hits have no real “impact” so to speak.  You’ll never be able to tell if you’re actually hitting an enemy or missing completely.  Even worse, no matter how fast (oh that’s rich) your flurry of punches or kicks you will always get hit.  Because of this every exchange will sap some health and that life bar drops fast.

In the arcade Double Dragon 3 was a notoriously greedy machine, forcing you to spend extra quarters for life and new moves.  The screwed up damage ratio was there to incentivize spending money and unfortunately it was kept for the home version.  Of course you’re not spending money but if you’ve bought this game you’ve already lost as it is.

Pathetic controls, bland level design and ugly graphics do not a good beat em up make.  It’s sad that every incarnation of Double Dragon 3 is not a good game.  Maybe the third installment is just cursed in general?  Who knows?  This home port would have been the perfect opportunity to fix the coin ops flaws but Acclaim (under their Flying Edge label) merely left it as is.  As a conversion its very good as a game its dreadful.