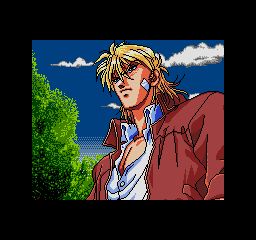 Ah Earnest Evans you could have been a contender.  In 1991 the Sega Genesis had only just begun its surge in popularity on the back of Sonic the Hedgehog and at that point the major third parties like Capcom and Konami were still not on board.  An action game in the same vein as Castlevania would have gone over brilliantly with the console’s audience, especially with Super Castlevania IV dropping jaws around the planet (I know I’m exaggerating).  Earnest Evans tries valiantly to fill that gap but fails miserably in the process.

But at least Wolfteam tried.  Renovation clearly tried to avoid comparisons to the Castlevania series by blatantly (seriously, check out the box art) selling it as an Indiana Jones like adventure; you know, that other whip wielding adventurer. You can’t fault them for that; both carry a whip and other assorted items as they explore ancient tombs in search of treasure.  But despite what Renovation’s US box art would have you believe the similarities end there.  Whereas Indy has had a relatively decent video game history Earnest Evans has fell into obscurity as the butt of many jokes and with good reason.

On the surface Earnest Evans looks like a winner.  The graphics are pretty damn amazing but it was to be expected; Renovation and their partners had worked with the hardware for many years at this point.  The game as a whole has a very vibrant look to it and the backgrounds are very detailed and excellently drawn.  There are a few scaling effects later in the game that are impressive but for the most part the game relies on its good art direction.  But as soon as you touch the controller the illusion is shattered.

The best way to describe Earnest Evan’s animation is like watching a marionette.  Segmentation was a technique used extensively during the 16-bit era almost exclusively for boss encounters.  By breaking up a large sprite into multiple individual parts you could sidestep a console’s limitations and create massive beasts or contraptions to fight.  It worked within the confines of a boss character because they weren’t designed to be jumping around like a Mario or Sonic.   By trying to use that same technology on a main character its limits were exposed.

While the animation itself is smooth the various moving parts of Earnest’s body are highly exaggerated in motion.  And even worse it affects the play control.  Anytime you perform an action you have to manipulate Earnest like a puppet.  The best example I can give is crawling or kneeling down; if you don’t first move Earnest back into a sitting position before trying to stand up he’ll roll uncontrollably, leaving you stuck waiting for the animation cycle to complete.  If you’ve played any game 3-d game with Havok physics this is the 16-bit equivalent and the results are just as hilarious.

If it were just the controls that were borked you could at least adjust to it but every other facet of the game has issues.  Collision detection is iffy at best.  There are the obvious hit sparks whenever you attack but since there is no tangible sense of feedback you can never tell if your attacks are effective.  There are many segments that require you to latch on to a hook and swing with the whip but getting this to work is frustrating to say the least.

Whenever you are hit there is no knock back or moment of invincibility, meaning your life bar is constantly drained as long as you remain in contact with an enemy or obstacle.  It doesn’t matter if it’s a bed of spikes or a simple bug, that life bar is sapped fast.  Each level is a maze of sorts with no clear direction; sometimes you’ll simply have to explore and stumble onto the exit, other times you’ll run across a boss unexpectedly, signaling the end of the level.  To me it seems as though Wolf Team spent all of their time on animating Earnest Evans and threw the rest of the game together haphazardly.

Which is a shame as it could have been decent with a few small tweaks.  The graphics are amazing with some beautiful backdrops at times and the soundtrack is especially good; Motoi Sakuraba once again is on sound duty.  While the animation is annoying you quickly learn to adapt but the flaws apparent in the rest of the game drag it down.  As much as I tried to like Earnest Evans I can’t recommend it to any sane human being.