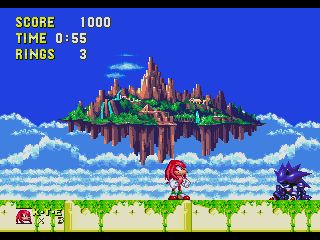 It was a lot easier to surprise gamers in the 90s since the internet was not readily available.  Most of us received our info from magazines that were usually 2-3 months behind current events.  So in mid 1994 when Sega announced Sonic & Knuckles it came as a surprise to everyone since Sonic 3 had just released a few months earlier.   Next to Donkey Kong Country and the 32X it was the surprise of the year and packed an extra surprise as well.

Sonic & Knuckles was released in October 1994 worldwide.  Continuing the story began in Sonic 3, the Death Egg has fallen but is still operational leading Sonic to chase Robotnik before he can steal the Master Emerald and repair it.  Knuckles is pursuing Robotnik after having been deceived by him as well.  Initially conceived as one massive adventure Sonic & Knuckles was created when Sega realized their plans for Sonic 3 were too ambitious for one massive game.  But in a roundabout manner their original goal was still achieved thanks to Lock-On technology.

Playing as Sonic is exactly the same as ever, with all of the new moves and power ups carried over from the third installment.  The real star of the show is Knuckles.  Much like Tails he is not as fast as Sonic but has special skills to make up for it.  With his dreadlocks and spiked fists he is a different beast entirely, able to glide for short distances and use his fists to climb or break walls.  Playing as Knuckles is a different experience altogether since you can power through most obstacles or even avoid them if you so choose.  Accommodating these differing play styles are the expertly crafted levels.

Because of their skill sets the levels have been designed to accommodate both play styles.  Many paths are unreachable to Knuckles even with his climbing skills due to Sonic’s higher jump.  Conversely there are sections where Knuckles can glide for long stretches or sectors that are blocked off to Sonic.  It’s incredible that they were able to design such large levels so tightly and cater to both characters without making it seem unfair.

Because of the large levels both Sonic and Knuckles are afforded numerous opportunities to strut their stuff; in Sonic’s case moving at break neck speeds and for Knuckles using his skills to explore.  In many ways this represents the Sonic formula perfected.  The stages are large but not to the point of frustration and challenging as well.  It can be very easy to get trapped by hazards or ignore the clock, which is omni present and serves to curtail your curiosity when necessary.

The big innovation that S&K brought to the table is the lock on cartridge.  By combining Sonic 3 with S & K you get one massive adventure the way Sega originally intended.  Playing through both Sonic 3 and S& K also justifies the battery backup included in both games.  The main bonus of locking on is to collect all 14 chaos emeralds from both games and unlock Hyper Sonic, Tails, or Knuckles, each with even better abilities than their Super counterparts.

Combining the game with Sonic 2 allows you to play through that game as Knuckles and while it is a novel concept it’s obvious that it wasn’t fully designed with that in mind.  And for those that are curious doing the same with any other game doesn’t work or only grants access to infinite variations of the special stage.

As good as the game turned out there is the sinking feeling that it’s more of the same.  New elements have been added but at its core this is still the second half of Sonic 3 and it shows.  The new levels are nice and don’t recycle any visual themes from Sonic 3 but the fact is the two games were released less than a year apart.   It reminds me of Street Fighter 2 with all of its incremental updates that wound up pissing off the fans despite the games being exemplary when judged on their own merits.

Regardless of whether that bothers you or not the fact remains Sonic & Knuckles might be the best Sonic game for the Genesis.  For almost half a decade this would remain the sole bright spot for Sonic as a series.  The game has been re-released on almost every major console since so it’s just a matter of picking your poison.