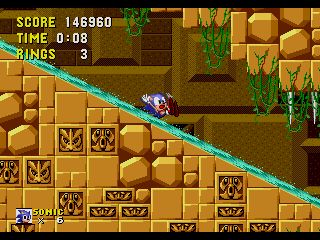 The videogame graveyard is littered with the bodies of failed mascots from publishers past who tried to get a piece of that sweet Mario platforming pie.  In their eyes it should have been easy to replicate that success:  create a cute character, give him some floating platforms to jump on and call it a day.  But seldom did that formula work.  It seemed the Mario series would stand alone on top of the hill until a spiky blue hedgehog came speeding into the limelight and helped spark a legendary console war.

Sonic the Hedgehog was released in 1991 worldwide and it’s safe to say it changed Sega’s fortunes (at least in the US) in the video gaming landscape.  Sonic was created as the antithesis of Mario and it shows throughout the game design.  Whereas the Mario series are slower and more measured, the Sonic games to a large extent are about blazing through the levels at breackneck speeds collecting as many rings as possible.  That simple concept of speed was the creative spark needed to differentiate the game from all of its contemporaries.

Divided into 6 zones with 3 acts each you follow Sonic on his journey to save his friends who have been imprisoned inside by Dr. Robotnik.  The first thing that hits you at the start: the visual design.  No other game looked like Sonic at its release and to a degree since.  From their use of color down to the stylized look of the world the game had a unique visual identity of its own.  The sense of speed emanating from Sonic is apparent right from the start but it’s when you hit your first loop de loop that you’ll crack a smile.  You know, we take it for granted nowadays but the first time you experience the perfect physics as you loop and come out barreling with more speed is just……exhilarating.  It’ll make you want to do it again and continue that streak to see how fast and how far you can go.

The sense of danger from the enemies themselves is almost nil; you’ll worry more about being crushed to death or losing rings more often than not.  You’re invincible so long as you keep 1 ring and while you want as many as possible for extra lives and a higher score you won’t really care sometimes if it means you’ll be able to press onward.   Some exploration is there but not to the extent that the sequels would take it.  This pairing down of the game’s fundamentals to the bare essentials both helps and hinders the game.

Each zone possesses its own theme and traps as you advance.  The third act of every zone is usually shorter than the preceding two because of the boss fight at the end that caps off each zone.  You’ll appreciate this; as great as the levels are by the third act you’ll become sick of it and want to move on just to see something different.  The boss fights are very simple with the exception of the Labyrinth zone (where you don’t actually fight Robotnik at all) with the most basic boss patterns.  To me they come across as concessions to standard game design clichés that dictate a boss battle at the end of every level.  The graphics obviously are fantastic and just when you think the game can’t throw anything more impressive at you the following stage will blow you away and is more remarkable than the last.  The special stages that house the chaos emeralds are psychedelic with their constantly shifting backgrounds and frequent rotation and serve as a nice treat at the end of a stage.

Games like this are very rare.  The kind that possess that intangible oomph that sets it apart from everything else.  It’s odd to think that such a simple concept would be so universally loved but the technology simply wasn’t there to fully utilize and properly showcase it until the 16-bit era.  It changed Sega’s fortunes in the marketplace and empowered them to embark on an aggressive marketing spree that some still talk about today.  We formally call them events, and this game very much belongs in that category along with Super Mario Brothers, Final Fantasy VII, Mario 64, Halo, etc.  Not bad company to keep at all I say.