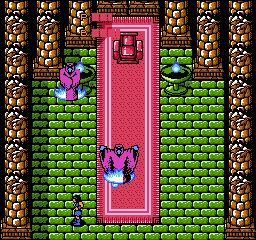 I’m always kind of amazed that with the popularity of the Legend of Zelda the US and Europe received very few of the games that were inspired by it in Japan. Over in Japan there is quite a large volume of action RPGs that have almost the exact same structure (as well as more Dragon Quest clones than should be legally allowed) with some of them being actually really good games. Konami’s Dragon Scroll sits somewhere in the middle; there’s a lot to like about the game but like Simon’s Quest there is also a shit ton of frustration to deal with as well. The game’s vague story and hints aren’t a result of a bad fan translation but were always there to begin with. Only those who can tolerate a ton of janky design decisions need apply sadly.

This would not be Konami’s first attempt at infusing RPG elements into an action game. I made the comparison to Castlevania II: Simon’s Quest earlier for a good reason as the two games share so much in common. Both games drop you into the world with no direction but where Castlevania more or less has some order in which you can accomplish your goal Dragon Scroll is completely nonlinear. There is very little keeping you from visiting late game areas early on aside from the fact you’ll die in seconds. The two games unfortunately share the same penchant for only providing obtuse clues as to where you should go or what certain items can do. I would even go so far as to say this might be even worse in that regard! Yet I still liked Dragon Scroll to an extent but unless you plan on using a guide don’t bother since you will never figure out some of the cryptic bullshit in this game otherwise.

At the start you are armed with a simple staff with a short attack range and your wits. Defeating enemies gains experience which will increase your life bar, magic meter, or attack power at set intervals. Unlike most 8-bit Rpgs the leveling curve is actually pretty fair and if you spend about 10 minutes grinding in the desert you’ll stay ahead of the curve for the rest of the game. There are only 2 other staves earned for the rest of the game but an assortment of secondary items that all serve some purpose in the game but you’ll be hard pressed to figure them out on your own.

I can appreciate a nonlinear adventure as much as the next guy but at the very least they provide some guidance. Dragon Scroll doesn’t even give you that much. The only stated goal is to find the eight magic books and stop the Chrome Dragon but as for how you go about that task, good luck. In the Legend of Zelda the game kind of guides you to the first dungeon but here all you can do is walk around, kill random enemies and listen to the vague bullshit they have to say. I wish I were joking on that last point but I’m not. Constant references to landmarks and other zones are dropped but the game does not explicitly tell you where they are.

The various items grant spells that serve specific functions in the game that you’ll have to learn on your own. Some are obvious; the silver ring increases your walking speed and the crystal ball provides an auto map. The most important is the Yunke Fruit which will reveal hidden items and this is where the game really jumps the shark. Almost every crucial item is hidden within a stone pillar or part of the environment that you must hit with the Yunke fruit to reveal. The problem is you are never told where and when to use it and have to exercise trial and error. Occasionally it is fairly obvious; if you come to a dead end with a lone statue chances are its hiding something. But when there are rows of stone formations and such you don’t have enough magic to try all of them.

And it gets even worse. Remember in Simon’s Quest, having to crouch on Deborah’s Cliff with the Red Crystal equipped for a few seconds to gain transport to another region of the world? Sometimes you’ll have to stand between two statues for a few seconds to reveal hidden chests or teleport to a remote door here. The worst is the Illusion Tower. To access it first you must use the Rain Bell at a set point. Then you’ll need to use the Yunke Fruit to make the door appear. Guess what? There are no clues as to these steps within the game. Yeah.

God I could keep going on but you get the point. It’s as though Konami saw what Nintendo did with Zelda and did the bare minimum to replicate it but ignored all of the subtleties that made it great. The audible clues whenever you have successfully completed a puzzle, the direct hints and clues given out by citizens in dungeons and the world. It was a challenge but one that was doable because the game gave you enough hints to figure things out on your own and was at least obvious enough that you could guess if need be. Dragon Scroll is inscrutable by comparison.

This was a valiant attempt at an ambitious action RPG but is ultimately bogged down by being too open ended for its own good. Unless you plan on playing the game with a guide nearby don’t bother. While I wish I could say we missed out on a cool game in the end I think Konami made the right choice leaving it in Japan.