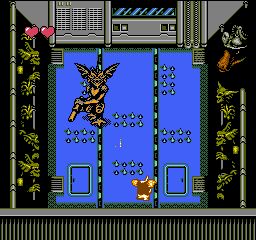 God damn, Sunsoft were so awesome they could even make an obscure (well now it is) license like Gremlins into video game gold.  I doubt many of you even know what the hell the Gremlins are; basically don’t feed them after midnight, never get them wet, and never expose them to sunlight or bad shit will happen.  In retrospect you can see how it can make the basis for a good game but the movies themselves were more comedy films with brief moments of horror.  But that didn’t stop Sunsoft from crafting one of the best top down action games for the system.

The plot of the game is slightly different from the movie for gameplay reasons.  Our hero Gizmo is left out of his cage and during the course of wandering around the offices of the Clamp building becomes wet and multiplies, creating the antagonists for the game.  What this means for us is a trek through the many floors of the building destroying any random gremlin spawn on the way to the top.  It’s not a stretch to assume no one expected much from this game however Sunsoft bucked the licensed game trend and created an enjoyable action romp from an unlikely source.  If only they were still around today (pours a 40 oz.).

If you’ve played the overhead portions of Blaster Master than you’ll have a good idea of what the gameplay is like.  Gizmo is initially armed with a mutated tomato but after each level gains a new weapon upgrade.  This can be further enhanced in the shops with power canisters.  The crystals dropped in plentiful supply serve as currency for the shops but you can only buy one item per level.  Eventually Gizmo will become a walking death machine when that lame tomato is upgraded to a paper clip, matchstick, and finally a fire bow but at that point the focus shifts to the platforming.

Unlike Blaster Master there are equal parts platforming to compliment the action.  Normally this doesn’t work in overhead games due to a lack of shadows to mark your position but it works beautifully in this game.  You still maintain control once air born and can somewhat save yourself when push comes to shove.  If you truly suck at it you can buy balloons that pull you up and grant a few seconds of invulnerability.  I shouldn’t word it that way because the game does get difficult in the latter portions.  That generous life bar soon feels inadequate as the gremlins become more powerful and the conveyor belts more frequent.  But through it all it remains fair.

Despite its setting occupying one office building the game does a very nice job of varying the surroundings.  There’s a surprising amount of detail in the backdrops and Gizmo sports excellent animation as well.  The bosses truly stand out, with some of the more popular Gremlins from the film making the jump to the small screen.  It shouldn’t come as a surprise that the production values are so well done; Sunsoft had been doing this for years on the NES at this point but it was rare to see any developer assign a top notch team to a licensed game; look at all of the Acclaim/LJN trash as an example.

I admit that were it not for the Nintendo Power review I would never have bothered with Gremlins 2.  I liked the movie well enough but the thought of a game based on its events seemed destined to join the ranks of Total Recall and Predator.  But I should have known better considering the architects behind it.  Now if only they had survived the transition to the 32-bit era.