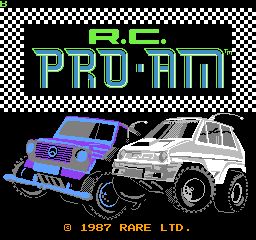 My memories of RC Pro AM are distinct: one of the first vehicular combat games with a unique perspective and tight gameplay.  It could possibly be the best racing game on the NES.  However there is one flaw that drags the game down, and while it doesn’t knock it from its top position on the platform it can ruin your enjoyment of the game depending on how much tolerance you have for it.

You compete in a series of 24 races against 3 opponents with the object being to place in the top 3 to advance.  Played from an isometric perspective RC Pro Am’s viewpoint set it apart from its contemporaries.  Most racing games of the time were first person or behind the vehicle; the ¾ perspective allowed you to see a larger portion of the track and plan ahead.  Although the vehicles are a bit large there are convenient arrows that will alert you to upcoming turns.  Since you are controlling radio controlled vehicles the handling is a bit different than you would expect.  This is one of the earliest instances of drifting, and mastering its use is crucial to victory.

Lest you think RC Pro AM is a strictly left to right racing game it introduces power-ups starting with Round 2.  Although other games such as Death Race preceded it I would say RC Pro Am popularized the concept of vehicular combat and largely spawned the genre, with the likes of Mario Kart and Rock and Roll Racing running with it years later.  Scattered around the tracks are various power ups such as missiles, bombs, stars for ammo and the invincibility roll cage.  By collecting the letters that spell Nintendo you can upgrade the standard RC truck twice: first to a van then to a race car. The joy of getting a new vehicle is dampened a by the fact that the computer is upgraded too.

There are other power-ups such as tires for traction, gears for acceleration, and engines for top speed.  Truthfully aside from the momentary boost they give you the difference is negligible.   With the exception of invincibility the AI can’t use other weapons as the game would be impossible otherwise.  A well timed missile or running the computer off the road while invincible can mean the difference between third place and game over.  There are usually plenty of opportunities to make a come from behind victory using each weapon but even despite the slight edge you have it can be tough.

Each track is littered with various hazards that will trip you up, such as oil that causes spin outs, water to slow you down, rainfall that does the same or the worst one, and retractable walls.  The water hazards are simple annoyances that you will more than likely power through however oil will cause to spin and lose control while keeping your forward momentum.  The retracting walls are a near instant loss if you collide with them since you’ll have to wait a few seconds for your truck to repair and build up speed again.  Working in your favor are the zip lines that provide massive bursts of speed.  If you see one you have to do everything in your power to hit it because the computer definitely will.  Every time.  Which is part of the problem.

It’ll take a miracle to come in first place in the later tracks.  If you fuck up like the screens above you might as well prepare to lose or reset.

That flaw that I mentioned earlier?  My biggest pet peeve when it comes to racing games: rubber band AI.  RC Pro Am is host to some of the worst rubber band AI I have ever experienced.  This goes beyond simply catching up when you are ahead.  The game will give the computer such ridiculous speed boosts that not only will they pass you sometimes they even fucking lap you! Luckily instances like this are few and far between but you still have to be at the top of your game.  If you don’t hit every zipper and crash into a wall even once or twice the computer will pass you.  Guaranteed, every single time.

Is it still a classic?  Certainly.  But I would be remiss if I neglected to mention the cheap AI.  Honestly the only thing missing from the game is multiplayer but that can be overlooked considering everything else it does right.  Mario Kart and Twisted Metal have taken the ball and run with it but RC Pro Am is still the originator.