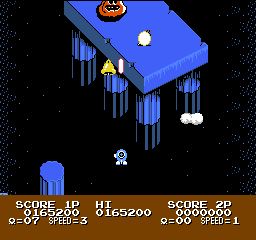 Well they certainly tried with the Twinbee series on NES. For all of their faults the Famicom editions of the games had good ideas buried under average production values. My experience with the series for the longest time came from Stinger, and I was not impressed to say the least. After spending a few hours with family on the bus and walking to buy a new game that was what we came home to. Yeah. Eventually Konami would find their grove with Detana Twinbee but Twinbee 3 was on the right track at least. This is not a great game by any stretch but is a significant improvement over its lackluster predecessors.

What is immediately apparent is the significant graphical overhaul the game has received. The game is a lot faster and smoother and exhibits a much wider color palette that is put to good use throughout the game’s imaginative worlds. The game still has a weird assortment of random enemies that don’t look like they belong in this world yet you still go along with it because the series in general is strange. This is exhibited by the just plain weird bosses. The dragon with a mouth full of little demons that needed to be excised from its teeth is certainly original. But then there’s the ghostly music trio who are putting on a show with deadly musical notes as part of the ensemble. While it is an improvement it does pale in comparison to similar titles released around the same period even from Konami; you can’t help but feel this was a redheaded stepchild with no budget compared to Gradius II and Salamander.

Konami wisely decided to completely focus on vertical scrolling action and its impact immediately apparent. Juggling the bells in a side scrolling view was problematic since lining up your shots was far more difficult as well as dealing with a smaller playing field. While bell carrying clouds aren’t as plentiful as in the later games there are enough that you shouldn’t go too long without being able to collect a potential power-up. There aren’t as many ground targets to deal with unfortunately which sucks but that element of the series has never been shown a great deal of love.

In terms of weapons there are slightly less this time around and the ones that remain have seen their utility dampened. The standard options of speed-up, double shot, and lasers are present and accounted for. Collecting flashing bells awards two options that mimic your actions but here they move and shoot slower which almost defeats the purpose of having them. Not that the game needed new weapons as what is here is more than adequate but something new to show that this wasn’t a cheap sequel would have been appreciated. Unfortunately the lone new addition does more harm than good.

The Soul Recovery system nearly breaks the game as it completely trivializes and possibly makes it impossible for you to die. Whenever you take a hit an ambulance will appear and if you grab it you can avoid dying and also regain any power-ups collected. There’s no limit to how many times you can keep doing this meaning sloppy play has few penalties. Heavier attacks will insta gib you generally you can see those coming from a mile away. Couple this with a too few levels and you are left with a game with little staying power.

As much as I like Twinbee 3 however it can’t overcome the fact that it is so short. With a meager five stages everyone will blow through this in half an hour or less. Not that most shooters are long but that is damn near criminal in this case. The option to tackle the levels in any order you choose would be better appreciated if there were more of them. The challenge is pretty low which makes it even worse and while there is a hard difficulty it isn’t that much worse. At least there’s a different ending for beating that mode. With a few more levels this could have been a more solid release.

Twinbee 3 is a far better game than Stinger but still comes up short in a few key areas. There are far too many great shooters available for the NES to bother seeking out a slightly above average game.