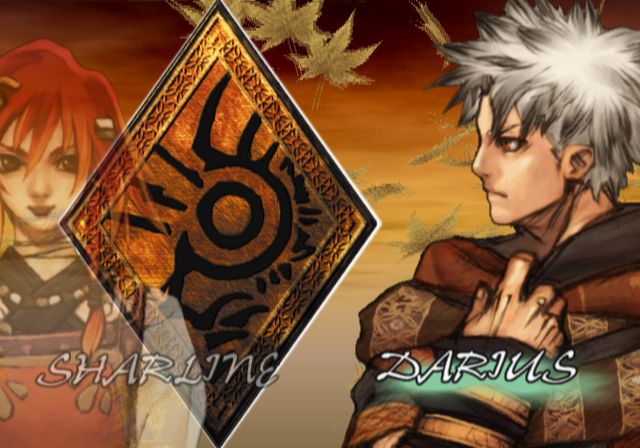 Typically RPGs don’t usually show up until well into the first year of a console’s life.  For obvious reasons of course, it takes time to craft an epic adventure.  But with the advent of the PS2’s release this ironclad changed.  With the North American release coming nearly 8 months after its Japanese debut quite a few RPGs were awaiting localization with Evergrace among that number. While it showcases a few unique ideas ultimately Evergrace demonstrates exactly why these games take time.

The Rieubane Empire was once the mightiest force on the continent of Edinbury.  Their leader’s unhealthy obsession with the Crests that some of the populace would ultimately lead to their downfall as the continent would eventually become sealed off from the world with magic.  100 years later both Darius and Sharline, both citizens of Fontraile end up in the remains of the Rieubane Empire and must discover what happened to the continent in order to find a way home.

At one point Evergrace was intended for a PlayStation release before being “upgraded” for the PS2.  It’s a fact that is evident throughout its design there are many facets of the game that were clearly designed with the PS One’s limits in mind.  Overall these limitations make Evergrace an average action RPG that while one of the better games at the PS2 launch is still ultimately forgettable.

You have a choice between Darius and Sharline at the start of the game but can switch between the two at any save point.  While the two have slightly different story points you’ll be visiting the same locations with each one and also finding the same equipment. Some locations are visited earlier with one character and the occasional puzzle is different otherwise the quests are the same.  You can forget about any intertwining story points as their adventures are separate although you do need to play through the game with both to reach the end.

As far as mechanics Evergrace is pretty solid in that regard.  You can freely attack as you choose although like Secret of Mana there is a power bar that refills after every attack.  Running is also affected by this as well.  Curiously the power bar is as long as your life bar, meaning the less health you have the faster it will recharge.  The power of attacks is also affected by how much pressure you apply to the face buttons.

There’s a heavy emphasis placed on equipment due to Palmira actions, which are basically special attacks.  Nearly all weapons and armor have at least one Palmira action attached that you can equip with all sorts of wild effects.  Some are extremely useful such as Crush, which can destroy boulders and create shortcuts.  Others enable multi-hit combo attacks or elemental damage. By upgrading your equipment in the shops you can unlock even more which makes combat fun.

At least it would if you fought more.  For an action RPG there really isn’t much action involved.  You will rarely fight more than one enemy at a time, the first sign that this wasn’t intended for the PS2.  For the most part most enemies are visible in each environment although they will occasionally teleport in, usually if you dawdle in one spot too long.  You’ll spend inordinate amounts of time wandering around barren locations with little opposition.  While the occasional boss battle might make you sweat these encounters are few, leaving you with a large combat arsenal and nothing to use it on.

The lack of enemies also extends to the population of the rest of the world as well.  Since there aren’t any towns to explore you’ll rarely encounter other people to speak with, leaving large gaps in the story.  You’ll never really feel satisfied with the game’s conclusion as so much of the story is left to your interpretation.  Unless you go out of your way to read the books scattered about you’ll forever remain in the dark about why Darius and Sharline wound up in the Rieubane empire or just what the hell happened to it in the first place.  The localization doesn’t do it any favors either.  There are frequent typos and weird turns of phrase.  The English voice acting is pretty terrible as well, which does have an impact as nearly all dialogue is spoken.

The game’s PS One roots also show up in the graphics.  The viewing distance isn’t very far and there are large drops in frame rate when something as simple as a projectile is unleashed.  While the environments are large the textures have simply been stretched to fit them.  The character models have seen the biggest face lift with clean textures and

One cool aspect of the presentation though is that every piece of equipment is visible when equipped.  It sound trivial now but this was not commonplace yet in 2000.  There’s a wide range of gear available, a lot of it downright strange such as a bird’s nest or pumpkin that doubles as a helmet.  You have the option to recolor all of your gear and it has somewhat of an impact as the shopkeeper will comment and possibly reward you if he likes your current ensemble.

Of the 4 RPGs available at the PS2 launch Evergrace runs a close second behind Summoner.  But that really isn’t saying much when your competition is Orphen and Eternal Ring.  While decent Evergrace is forgettable in the face of the stiff competition available on the platform.