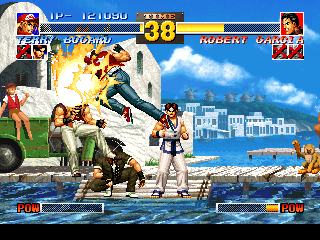 When you think about the King of Fighters was such a great idea I’m surprised no one else had attempted before.  The idea of an inter-company crossover is the stuff of fan boy dreams when you get right down to it, that’s why Super Smash Brothers is so popular.  Applying that to a fighting game was downright genius; I honestly thought Capcom would have done it first rather than SNK.  The King of Fighters ’94 was an awesome but flawed game that resonated with fans and lead to the far superior 1995 installment, the game that I believe truly put the series on the map.

Rugal Bernstein, organizer of the prior tournament, has apparently survived the events of the first tournament and sent invitations for the latest King of Fighters.  While standalone the events of KoF 95 would be retconned into the Orochi Saga not that this fact is important to 90% of fighting game fans.  What matters the most is that the game is back and better than ever.  Both the Saturn and Playstation versions of Kof ’95 were released closed to each other in Japan however it would be SCEA who would secure the exclusive US rights along with Samurai Shodown III.  Normally this would be a good thing but in this respect we got hosed out of the superior conversion.

At the time King of Fighters had the largest roster available in the genre at 24 characters.  Consisting of pugilists from 4 prior SNK games (Psycho Soldier, Fatal Fury, Art of Fighting, and Ikari Warriors, yes really)every team from ’94 returns with the exception of the terrible, stereotypical Sports  squad.  Taking their place is the new rival team consisting of the too cool for school Iori Yagami, fan favorite Eiji Kisaragi, and uh, Billy Kane.   The team is a great addition and makes the series feel “complete”; the rivalry between Kyo and Iori would be one of the main forms of conflict for the duration of the series.

With such a large roster pretty much all of the bases are covered in terms of fighting style.  All of the returning characters such as Terry Bogard, Joe Higashi, and the Art of Fighting crew play identically to their respective series while the newer combatants fall into familiar niches.  The King of Fighters has many subtle elements that help distinguish it from Street Fighter such as the evasive dodging and manually charging your super meter outside of taking damage.  The rigid team structure has been loosened up with the addition of team edit, allowing you to create your own three man squad.  This was the most glaring omission from the first game and possibly the most requested feature.  The freedom to mix and match to create custom teams allows gamers of all stripes to settle on a group composition to their liking without being saddled by one or two characters they simply have no affinity for.

New to the series are desperation moves which become active when you are left with 25% health.  If you can pull off the ridiculous button combination you’ll be granted an extremely cheap attack that will more than likely win the match if it connects.  The level of damage from attacks in general is exceptionally higher than normal and something that was becoming an issue in many of SNK’s fighters.  A quick 3 hit combo can drain up to 60% of your life making each round a relatively quick affair.  I suppose the fact that you have 3 party members does soften the blow a bit but it does mean you have less time to really enjoy the combat system.

It does also mean you’ll have to deal with this port’s biggest flaw: the load times.  In between every round are 5-6 second load times as well as the end of each match.  Considering you can decimate an opponent in as little as 10-15 seconds you’ll be staring at that loading screen quite often and it really breaks the flow of combat.  Even Capcom managed to keep the loading to a minimum with their port of Street of Fighter Alpha, meaning they could have done better.  Unfortunately outside of owning a Neo Geo or importing the stellar Saturn version this was the only option available at the time.  I remember hoping and praying for an SNES port (back when I knew nothing of RAM limitations and animation frames) so this was the next best thing.  I don’t know that anyone would have the patience to sit through an extended session with this port when there are superior options available.

There were some sacrifices made to fit the game within the PlayStation’s confines.  The animation has taken a step down and is noticeable to arcade aficionados.   The backgrounds however are identical.  This series lacks the clean look of the Street Fighter Alpha series with its pixelated sprite art but it’s strangely appealing.  The arranged soundtrack is fantastic and one of my all-time favorite fighting game OSTs off all time.  The music spans a wide range of genres from hard rock and jazz to the more classical.

At the time of its release this port was a more than solid rendition of a classic quarter muncher.  These days it’s been surpassed by numerous arcade perfect ports on the various digital download services.  There aren’t enough extra features available to overcome the gap in quality, leaving this a relic of its time.