Bad Street Brawler NES Game Cartridge
Bad Street Brawler was released for the NES in 1987 and was Developed by Beam Software Pty., Ltd. and Mindscape Inc. was the publisher. It was also one of the only two games for the NES that was designed for the Power Glove made by Mattel. The player will take control of Duke Davis. While using this character, the player will beat up gangsters that are wearing sunglasses, and yellow pants and tank tops. Your character is also has the description of being the coolest martial artist in the world and a former punk rocker. Before starting another stage, quotes will show up on the screen that are designed to entertain players. There are enemies like gorillas and older ladies who will throw pocketbooks at you. The moves available for the player are the trip and bull ram.
UPC: 0-74299-04062-7
Platform: NES
Players: 1
Condition: Used
Genre: Beat’ em Up
Region: NTSC (North America)
Rating: Everyone 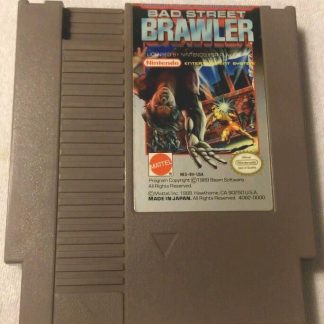