Bases Loaded 2 NES Game Cartridge
Bases Loaded II: Second Season was released for the NES in North America in 1990. The game is the successor to the original Bases Loaded and has a sequel with Bases Loaded III. There were no arcade versions of the second game and so on. Peter Lerangis turned the game into novels, being part of the World of Power book series from Scholastic Books.
The second game offers the same two modes like the first, with having a choice to play single games or single player mode for the race to the pennant. The player during the pennant mode must acquire a minimum 75-55 regular season record to advance to the World Series. You must then defeat either NY or LA in a best out of 7 series, depending if you chose a team from the Western league or the Eastern league. One of the major advances of the second game was having the ability of modifying the teams’ starting lineups and their batting order. The manual also outlined the pitcher’s roles with the detailed team rosters.
The same 12 teams from the first game have returned with newer players. The entire roster on Washington D.C. get their names from famous politicians, and all the players on Los Angeles have their names from Hollywood stars. One player on the Hawaii team has the name Ho, after Don Ho. One newer feature was the inclusion of a biorhythm concept, which allowed players on the teams to be monitored so you can get the optimal performance from them. The gameplay is faster than the first, and when the ball is hit, the view is different. Also, the view is now from first base line when the team that’s home is batting, and from third base line when the visitors are batting.
UPC: 0-32264-90007-9
Platform: NES
Players: 1-2
Condition: Used
Genre: Sports
Region: NTSC (North America)
Rating: Everyone 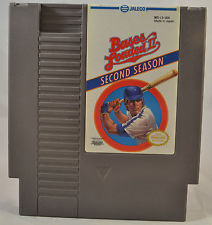