Batman NES Game Cartridge
Batman: The Video Game was was published and released for the NES by Sunsoft in 1989, based off of the 1989 movie Tim Burton directed. It is a platformer game and consists of five levels which need to be completed in order to get to the Joker in the bell tower, the final showdown of the game.
The game had a feature that’s different from the Genesis and Mega Drive versions, which is Batman having the ability to wall jump, similar to Ryu Hayabusa from Ninja Gaiden. The player had three projectile weapons to use, which were a dirk, a bat speargun, and the batarang. Various villains from DC Comics appear in the game as enemies, like Deadshot, Maxie Zeus, KGBeast, Shakedown, Heat Wave, and Nightslayer. The bosses are the Electrocutioner, Killer Moth, Firebug, a device that was called Machine Intelligence System, another machine called the Dual-Container Alarm, and the Joker, not appearing in this order however.
There were differences in the prototype version of this game. There was a 1 UP symbol and completely different cut scenes. It also had Firebug as the final boss with the Joker being defeated during a cut scene after the Firebug fight. The dialogue and art were modified for the final version to resemble more of the movie.
UPC: 0-20763-11009-9
Platform: NES
Players: 1
Condition: Used
Genre: Platformer
Region: NTSC (North America)
Rating: Everyone 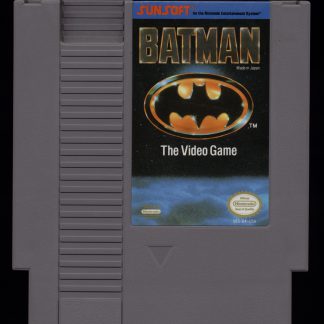