View cart “San Francisco Rush Nintendo 64” has been added to your cart.

Bigfoot NES Game Cartridge
Bigfoot was released for the NES in 1990. Beam Software developed the game and Acclaim published it. The monster truck with the exact name from the cartoon segment of the show Video Power advertised the game. The show often used the sound effects from Bigfoot’s actions and others. The game goes from LA all the way through NYC in different types of races. The gameplay will involve racing the monster trucks that also includes the blue Bigfoot. The computer trucks are the Growler, which is green, and the Charger, which is yellow. While in two player, the second player’s monster truck will be red. It was common for a player that is skilled to have a challenge from three or four different trucks while playing the game.&nbsp;
At each stop, the player will need to participate in a qualifying round against the computer opponents. This will be in a top down view. This is where the player can collect power ups and money to use for beating the opponents. After the qualifier, the player goes into the side view where they have head to head races and need to press right and left continually. The goal is trying to advance onto the next race and take as little damage they player possibly can. These levels will consist of hill climb, tractor pull, mud bog, and car crushing. The later levels will have a combination of all the types except for sled pull, which is called drag race. Before those races begin, upgrades can be bought for the truck with money collected from the qualifying race. To progress to another event, the player will need to complete a race that is cross country and collect points, money, etc without taking damage to the truck.
UPC: 0-21481-10304-2
Platform: NES
Players: 1-2
Condition: Used
Genre: Racing
Region: NTSC (North America)
Rating: Everyone 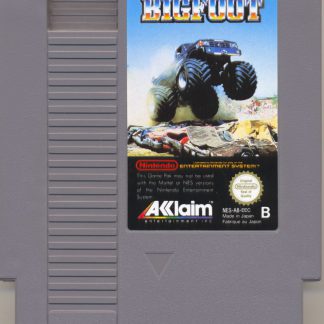