Cabal NES Game Cartridge
Cabal was released for the NES in 1990 and was originally released as an arcade game in 1988. The cabinet of the arcade version was a standard being upright. Both players used a trackball for moving their character left and right. On later revisions, there was a joystick put in and had the option for a sub-pcb to use the trackball. A dodge roll is done by using the trackball and pushing it at max speed.
There is a one and two player mode. Both players will take control of a commando with no name and try to destroy the enemies’ military bases. The game has 5 stages that have 4 screens a piece. You start with three lives and have a gun that has infinite ammo. The amount of grenades are limited however. The view is from behind the commando and will start behind a wall that can be destroyed with enemy attacks. The player will need to avoid bullets from the enemies by moving right or left, hiding behind objects, or the dodge roll. There is an enemy bar at the bottom of the screen that will deplete as enemies are defeated and specific structures are destroyed. When the player empties the enemy gauge the level is finished and the rest of the buildings will collapse, progressing to the next level.
If one of the players is killed, they are instantly resurrected with a life unless there are no lives left. Boss fights will restart completely if a life is lost. Objects will occasionally drop power ups, which will give you special weapons like a really fast machine gun or a shotgun that has a lower fire rate but larger area of effect and automatic. The other power ups will give grenades or extra points.
The game was innovative during that time since it had a 3D viewing perspective from over the shoulder which is similar to current third person shooters. It is compared sometimes to Ikari Warriors and Commando but it does not allow the player to go forward on his own, since a certain amount of enemies will need to be defeated before advancing. The player also cannot shoot and move simultaneously, but will move the aiming cursor instead. The cursor moves along with the character while dodging bullets. This will make the need for defensive and offensive tactics, making the game somewhat unique since reflexes were relied on. Advanced playing involves management in balancing the dodging with alternatives of going to cover behind a wall with certain durability.
UPC: 0-32244-04089-4
Platform: NES
Players: 1-2
Condition: Used
Genre: Shooter
Region: NTSC (North America)
Rating: Everyone 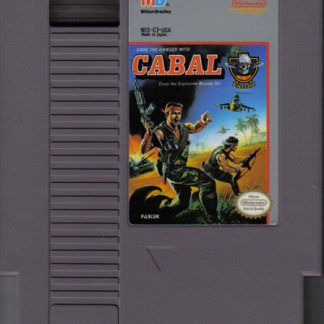