Cartoon Workshop NES Game Cartridge
Tiny Toon Adventures Cartoon Workshop was released for the NES in 1992. Novotrade developed the game and Konami published it. The game attempted to make players directors. It also let the players control the cartoon’s direction with having them become set decorators, cinematographers, music composers, and screenplay writers. Two characters in the game can be on screen simultaneously. The characters included are Little Beeper, Calamity, Furrball, Plucky, Babs, and Buster. The player can set them in multiple situations and poses, having a large amount of backgrounds and settings to choose from. Editing features, captions, sound effects, and musical inserts are also available to choose using a graphic user interface resembling a lower quality Windows 3.1 application.
The player cannot save a cartoon on the game. However, they can use a VCR or some other method to screen capture them. The cartoons created on the game can last a total of five minutes, with a regular Tiny Toons cartoon on television lasting typically 28 minutes.
UPC: 0-83717-11030-9
Platform: NES
Players: 1
Condition: Used
Genre: Action and Adventure
Region: NTSC (North America)
Rating: Everyone 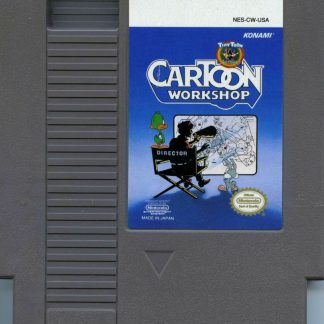