Championship Pool NES Game Cartridge
Championship Pool was released for the NES in 1993, along with multiple other systems. It is a pool game that Bitmasters developed wit Mindscape releasing it. The Billiard Congress of America officially endorsed it. The developers and programmers of the game were David O’Riva and Franz Lanzinger. Jerry Gerber did the music, who composed music for the Gumby movie and newer Gumby series. It is a straightforward game, being a virtual pool, and having several games. The games are three-ball, eight-ball, nine-ball, ten-ball, fifteen-ball, rotation, straight pool, speed pool, and equal offense. The game can be played solo or with seven others for a total of 8 players using one console. This amount of players can be played by choosing Party Pool on the menu. Three other modes are Tournament for solo play, freestyle to make your own rules, and challenge for solo play and shot practice.
UPC: 0-50047-11366-9
Platform: NES
Players: 1-8
Condition: Used
Genre: Sports
Region: NTSC (North America)
Rating: Everyone 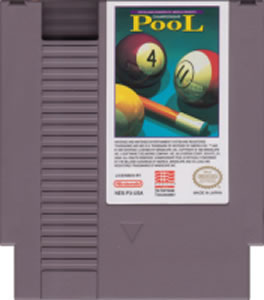