Exodus Journey to the Promised Land NES Game Cartridge
Exodus: Journey to the Promised Land was released for the NES in 1990 and was not licensed officially by Nintendo, like all other games made by Wisdom Tree. The game is a clone of Boulder Dash, another company’s video game. Wisdom Tree did this for a lot of their games. The music in the background of levels is the Father Abraham theme, which is a popular Christian song for children that was based on an iconic person in the Old Testament. A sequel called Joshua was released later that featured improved gameplay and graphics, but does not have background music.
The player takes control of Moses from the Bible to lead Israelites to the promised land. The player will go through labyrinths. The player as Moses will shoot W’s that glow, which the W’s signifying God’s word, to defeat the enemies and remove objects. Every level will have the player find five different question marks along with certain amounts of manna. Enemies like soldiers and magicians will need to be avoided. When completing a level, the player will need to answer five questions with multiple choice that are Bible related before the next level is advanced to. If enough of the questions are answered correctly, the player will be rewarded with a life.
UPC: 8-83929-06746-6
Platform: NES
Players: 1
Condition: Used
Genre: Puzzle
Region: NTSC (North America)
Rating: Everyone 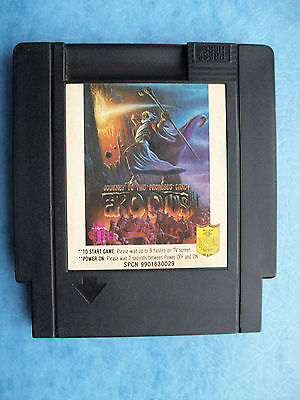 You're viewing: Exodus Journey to the Promised Land NES $29.99
Add to cart