Firehawk NES Game Cartridge
Firehawk was released for the NES in 1991. It was unlicensed and Codemasters developed the game while Camerica published it. The gameplay is similar to the game Desert Strike and others in that series, also being nearly the same as the game Raid on Bungeling Bay, which was released back in 1984. The U.S. President has commissioned the player to stop drug trafficking into the U.S.A. The player will take control of the Apache helicopter in the game and fly to a variety of places on earth to destroy drug trafficking factories. There will be seven missions that will involve this, along with rescuing agents. The view will be from the top down perspective, changing to 3rd person when rescuing an agent using the helicopter winch.
UPC: 0-69667-07406-9
Platform: NES
Players: 1
Condition: Used
Genre: Shooter
Region: NTSC (North America)
Rating: Everyone 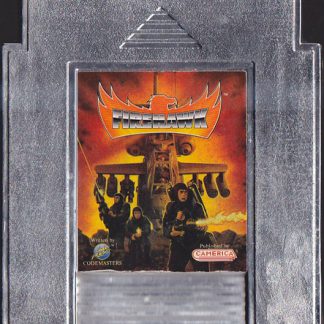