Fisher-Price Firehouse Rescue NES Game Cartridge
Fisher Price: Firehouse Rescue was released for the NES in 1992. It was developed by Imagineering and published by GameTek. The player will take control of a fireman that is driving the firetruck. The firetruck and fireman look really familiar to the Fisher Price toys of the same two objects. The goal is trying to people from inside their houses and pets from the trees in the neighborhood. There will be 2 different parts to the task. The first will involve driving around streets that are maze like from a top view to find some troubled residents. Once the player reaches a house, the second thing to do is maneuvering the ladder on the firetruck underneath the animal or person that needs to be rescued, letting them get to safety. This will be from the side view.
Level one will confine the whole neighborhood to a maze that is one screen. The later levels will span more than one screen which will increase the challenge. There will also be time added to later levels with extra keys the player will need to collect before they attempt a rescue mission.
UPC: 0-43985-0006-5
Platform: NES
Players: 1
Condition: Used
Genre: Action and Adventure
Region: NTSC (North America)
Rating: Everyone 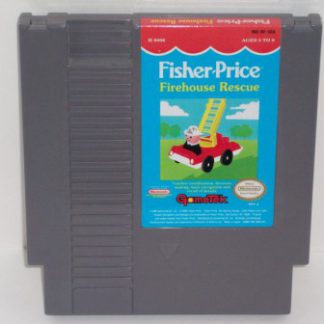