Friday the 13th NES Game Cartridge
Friday the 13th was released for the NES in 1989 and was developed by Atlus, with LJN publishing it. The game is adapted from the film franchise of the same name.
The game takes place in the summer at Crystal Lake with a happy group of kids. You and six Counselor friends watch the kids while having fun in the wilderness and the lake. Jason then goes on a rampage. The camp relies on you, so you must fight through the forests full of wolves, caves with bats that will suck your blood, and zombies everywhere. You will also need to save any of your friends in danger.
The player will choose between one of the six counselors, each having their own stats on speed, jumping, and rowing. You start with a rock that will throw at an arc. The goal of the game is to find Jason Three times and defeat him every time found. The player well come across cabins, the lake, wooded areas, and caves. All the areas but the cabins will have zombies, wolves, and crows attacking you. The weapon the player has can be upgraded by finding another one. Some parts of the game will require the player to locate Jason before time runs out, or he will kill children or a counselor. You will use a map to search for the location of Jason or you can change to the counselor that is being attacked by Jason and beat him.
When getting close to Jason, he may appear out of the lake or from the path and attack you. If you find Jason in a cabin, the fight sequence will resemble that of the game Punch-Out!!. If you light all the fireplaces in a large cabin, a torch weapon and flashlight become available. Notes can also be found in the large cabins which will lead you to another location with new items. The objective is to not die for 3 days and 3 nights while trying to kill Jason. You have the option of battling the mother of Jason located in a cave that is locked and hidden. She looks like a floating Medusa head that attacks you by charging down at you. The woods and caves are purposely made to be confusing to disorient you while navigating. There are also many hidden locked rooms and cabins. If all children or all counselors die, it is game over.
UPC:0-23582-05162-8
Platform: NES
Players: 1
Condition: Used
Genre: Action and Adventure
Region: NTSC (North America)
Rating: Everyone 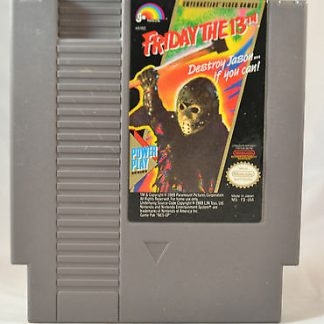