View cart “Ghosts N Goblins NES” has been added to your cart.

Ghosts N Goblins NES Game Cartridge
Ghosts ‘n Goblins was released for the NES in 1986 and was originally an arcade game released in 1985. Capcom developed the game and has appeared on many consoles. The NES port is rated 129th out of 200 best games made for a Nintendo console from Nintendo Power. It also was one of the best selling games on the NES, with 1.64 million games sold. It is often referenced as one of the hardest games in history to complete because of the extreme difficulty and because the player has to go through the whole game twice to beat it. It has also been followed by many spin offs and sequels, and eventually became Capcom’s eighth best selling franchise. Arthur, the main character of Ghosts ‘n Goblins, has made many cameos, with the most recent cameo in Ultimate Marvel vs. Capcom 3.
The player takes control of Sir Arthur, a knight, who must destroy ogres, demons, zombies, dragons, cyclops, and several other monsters to save Prin Prin, the Princess. She was kidnapped by the Demon World king, Satan. The player can get weapons, extra armor suits, and bonuses to help on the journey.
Again, the game is considered extremely difficult for many reasons. The player will lose a life just by getting hit twice, with hit one taking away your characters armor and will have to continue the level in underwear until the level is completed or replacement armor is found. Once a life is lost, the player will return to the beginning of the stage, or the midway checkpoint if it was reached. On top of that, every life only lasts for a limited time, usually about three minutes, and the clock resets at the beginning of a stage. If the timer runs out, the player will instantly lose a life.
The last boss will have to be defeated with a cross weapon. If the cross weapon is not on hand when fighting the last boss, the player will be told that it has to be used to beat the last boss and will then restart at level 5 and then must go through round 5 and round 6 again, even if the weapon is found immediately. When the last boss is defeated, the player will be told the battle ended up being a trap that was devised by the Demon king. The player will then have to restart the whole game with the difficulty being higher to get to the real final boss fight.
UPC: 0-13388-11002-5
Platform: NES
Players: 1-2
Condition: Used
Genre: Platformer
Region: NTSC (North America)
Rating: Everyone 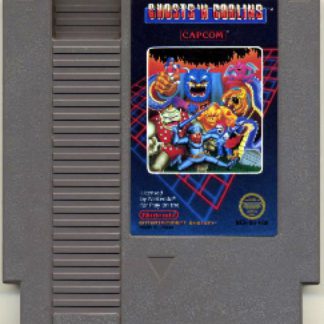