Gyromite NES Game Cartridge
Gyromite was released in 1985 for the NES and was designed for using the Robotic Operating Buddy. The game is called Robot Gyro in Japan. It is one of the only two video games in the Robot Series for Nintendo. The second game in the series is Stack-Up, known as Robot Block in Japan. The opening title screen for Gyromite shows Robot Gyro, the Japanese name. The programming for Gyromite remained unchanged from Japan’s version. A lot of Gyromite cartridges contained an actual circuit board of Robot Gyro, which had an adapter to allow the game to play on the NES console. The Famicon cartridges had connectors with 60 pins in which the adapter had to convert the cartridge to a connector with 72 pins that the NES had.
The character of Gyromite is Professor Hector, who has an assistant name Professor Vector. They both will navigate levels with help R.O.B., their robot creation. Hungry bird monsters called Smicks and dynamite have threatened their lives. Hector has tendencies to sleep walk, which also causes trouble for him. While the Professor goes through the stages, R.O.B. will help him navigate by lowering and raising the blue and red gates. When the pedestal that’s red is depressed by a Gyro, the lever will press B on the second controller and the red gates will be lowered. When the pedestal that is blue is depressed by a Gyro, the lever will press A on the second controller and the blue gates will be lowered. Action never stops on the screen so the character will always be vulnerable while trying to operate R.O.B.
There are four game modes, which are Game A, Game B, Test, and Direct. Game A is for one or two players. The player will control a Professor and R.O.B., switching when necessary. Player one is Professor Hector and player two is Professor Vector. They both will need to collect all bundles of the dynamite in all 40 levels. The screen will turn blue when the player presses start and the Professor will turn toward the screen looking at R.O.B. the next buttons that are pressed will issue commands to R.O.B. All the commands to R.O.B. will need to be preceded with Start. Smicks are threats but harmless when they are eating turnips located through phases, with the Professor being able to pick them up and move them any time. The player will receive 500 points if they crush a Smick in a gate. A bundle of dynamite is worth 100 points. Every 10 seconds left on the clock when a level is completed is worth 100 points while every individual second is worth 10. The player is supplied with five lives.
Game B is one player and has Professor Hector sleepwalking while the player is controlling only R.O.B. Commands will not need to be preceded with Start since R.O.B. is directly controlled. Professor Hector will start on the left screen area, walking slowly to the right screen area. If Hector walks into a gate, he will keep walking into the gate until the gate is raised. The player will take control of R.O.B. to open and close the gates, which will allow Professor Hector &nbsp;to reach the other side of the level. Smicks will be present in mode B, but are mainly confined to dead ends. The player will start with three lives and will need to get through 25 phases to complete the game. To make sure R.O.B. is receiving signals, assuming the player has the Robot Buddy, they will need to do the Test mode. Select will send a signal to R.O.B. causing the red LED light on it to turn on.
The last mode is Direct, and there is no game played. It is used to just send signals to R.O.B. This mode is for players trying the game for the first time or players who want to just operate R.O.B. with no gameplay in Gyromite. Pressing down or up will make the arms go down and up. Right and left will make the arms turn clockwise or counter clockwise. A will open the arms while B will close them.
UPC: 8-64878-98800-2
Platform: NES
Players: 1-2
Condition: Used
Genre: Puzzle
Region: NTSC (North America)
Rating: Everyone 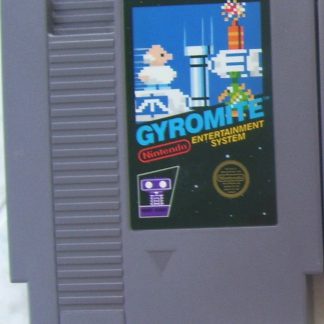