Jaws NES Game Cartridge
Jaws was released for the NES in 1987 and is somewhat based on the movie franchise that has the same title. The game mainly resembles the fourth movie, Jaws: The Revenge. The art on the box takes after the movie poster. The game does take some elements from the original film. It was also one of the few LJN titles that was developed by a company for Japan.&nbsp;
The player takes control of a boat traveling across the ocean encountering random groups of sea creatures. Your view is from an overhead map and when the boat runs into an object, it will change to a side scroller view. A diver is dropped into the ocean and will battle rays, jellyfish, and small sharks. Every now and then, Jaws will show up showing its dorsal fin above the surface of the water. If the players boat runs into Jaws’ fin, it will go to the side view and the player can then control the boat to try and attack Jaws. Jaws also will always run into the boat and the diver will always be dropped in the water. If the player grabs something on the main map and Jaws is close, he will also appear.
There are three items the diver can pick up. The first are crabs, which make your diver faster, the second are stars that give you bonus points, and the third are conch shells which are used as your currency. Upgrades and better equipment can be bought between two ports located on the overhead map. A receiver is obtained at the first port stop. This receiver will track Jaws from the main map. It will beep faster when Jaws gets closer. Port stops afterwards will increase the players attack power when fighting Jaws. If a hostile creature touches you while under water, it will kill the player and have them lose one power level, assuming it has been upgraded. The player will also lose the tracker, half their conch shells, and all of Jaws’ health will refill.
If a certain amount of small sharks are killed, it will give the player a bonus game, in which an airplane will go left and right dropping cannon balls on the jellyfish. The jellyfish will move in formations with specific moving patterns similar to the Galaga challenge stage. The speed of the plane can be changed depending on the direction you are moving. Conch shells are rewarded depending on the amount of jellyfish killed. 10,000 extra points will be awarded if all the jellyfish are killed. Extra lives are given every 30,000 points. A submarine can also be found, which will appear at random. It has depth charges and torpedoes and with less inertia than your diver. One enemy collision will destroy the tank and the diver will be released.
When Jaws loses health after encountering from the side scroll view, the game will change to first person from the boat. The player will then have three charges to make Jaws break the water surface, which must be done at the right distance. You can also thrust the bow of your boat forward when needed to. To completely defeat Jaws, you must stab it with the bow of the boat at the correct distance after it breaks the water surface. Jaws will be moving consistently so the last kill will be difficult.
UPC: 0-23582-05156-7
Platform: NES
Players: 1
Condition: Used
Genre: Action and Adventure
Region: NTSC (North America)
Rating: Everyone 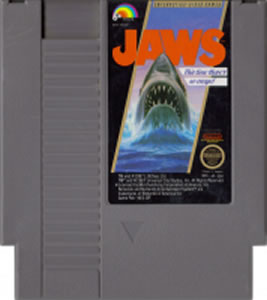