King’s Knight NES Game Cartridge
King’s Knight was released in 1989 for the NES and was developed and published by Square. This was Square’s first release in North America under the Redmond division Squaresoft. It was also their first independent company release. The music score was provided by Nobuo Uematsu, his third work for a video game. The Japan and American versions differed very little, as the title screen was the only change. The game follows a basic story that a lot of NES RPG’s had at the time. The princess, named Claire, was kidnapped from the Kingdom Izander. The player will need to train to be able to defeat the Dragon and bring her back to the kingdom. The rescuers are Ray Jack the knight, Kaliva the wizard, Barusa the monster, and Toby the thief.
The game’s primary objective is dodging or destroying all the obstacles and enemies on the screen. A variety of items adds depth to King’s Knight. The player will be able to collect power ups with any character to increase their level to a max of twenty per character. These twenty total power ups the player can get are seven Jump power ups, seven Speed power ups, three Weapon power ups, and three Shield power ups. Life power ups will increase the player’s character’s life gauge. Life downs do the opposite and need to be avoided. Other icons will affect the level, like a hidden cave entrance or exit and a secret revealer that will reveal a hidden stone blocking progress. There are also four different elements to find in every level, which is vital for completing the final stage. They are elements A, element B, element C, and element D.
Every stage has a variety of power ups, a cave, and every element type. It is very important to find caves in the game due to the fact that they have a minimum of one of the element types and a variety of power ups. All caves are hidden and are found halfway into the stage generally. There are also statutes that will shoot fireballs and a dragon at the exit to fight. When the dragon is defeated, the player will be able to exit to continue on with the stage.
UPC: 0-94689-19101-2
Platform: NES
Players: 1
Condition: Used
Genre: Shooter
Region: NTSC (North America)
Rating: Everyone 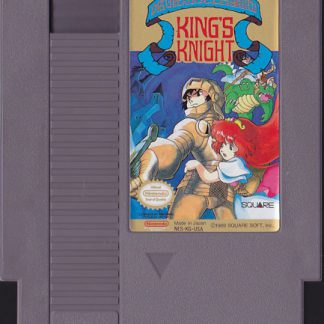