Magmax NES Game Cartridge
MagMax was released for the NES in 1988. It was developed by Nihon Bussan and published by FCI. It was also an arcade game that was released the same year in North America. The plot is about an evil alien menace attacked the civilized worlds, laying complete waste to those planets. Before they were conquered, however, a scientist group had managed to make one final weapon, then hiding it underground. The weapon was named Mag Max and it was the only weapon that could possibly defeat the aliens that were invading. The Mag Max weapon was incomplete, however, and its component parts were spread across the area for security purposes. Every component that is collected for Mag Max will increase its strength.
The game is a shooter with side scrolling on the screen. At the start, Mag Max will only be a small fighter craft and can fire weak projectiles. As the component pieces are located, like the head, the legs, and the laser lance, the player’s offensive power will increase. The underworld can be accessed through the dark craters located on the planet’s landscape. When the player goes into the underworld, their weapons will vary slightly, as will the enemies. There will be no objects stationary underground. Enemy contact or enemy fire on every one of the player’s components will end up destroying the component that was hit. When the player’s main fighter is fired at, it will destroy them once hit. Upon reaching then end in every level, there will be a boss.
UPC: 0-22909-10005-6
Platform: NES
Players: 1-2
Condition: Used
Genre: Shooter
Region: NTSC (North America)
Rating: Everyone 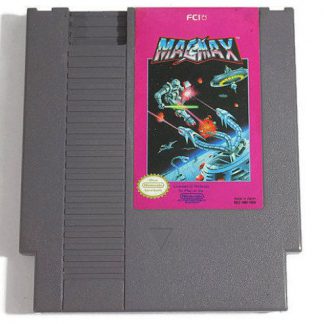