Metal Gear NES Game Cartridge
Metal gear was released for the NES in 1988 and was developed by Konami and was originally released in 1987 for MSX2 in Japan and some of Europe. It was the first game Hideo Kojima designed and was considered the progenitor of stealth games. The NES release was the first Metal Gear to appear in North America. Another division in Konami located at Tokyo developed this version of the game, being given the code from the original MSX2 version with no consent from the original developing team. One of the NES programmers, Masahiro Ueno, stated the staff working on the NES port had three months to finish it and had to make it differ as much as they could from the original MSX2 version. Because of the NES limitations, the boss at the end was replaced with a Supercomputer that four soldiers were guarding.
Solid Snake is the character the player controls. He is a member, and a rookie, of FOXHOUND, a special force group. He gets sent on a first mission and is assisted by Big Boss, the commanding officer, via radio. Big Boss gives Snake information about the mission goals and items. Schneider, a part of the local Resistance movement, provides locations of vital items. Diane will give information on defeating enemy bosses. There is also Jennifer, the inside agent assisting Snake. There are a few prisoners that Snake will rescue through his mission. The first is Grey Fox, who is an agent of FOXHOUND that was captured on an earlier mission. The second is Dr Pettrovich, who is a scientist and designed the weapon Metal Gear. The third is Elen, the Daughter of the doctor, who the enemy captured to make her father Dr Pettrovich build the weapon.
The player will use Solid Snake to navigate through the various locations in the game while trying to avoid direct confrontation and contact from guards. If seen, an exclamation point will appear over the head of an enemy, and the player enters Alert Mode. Snake will need to leave the enemy’s sight to continue the infiltration. In order to leave sight, the player will need to move to one of the adjacent screens. Snake can use a transceiver to talk to Big Boss or some of the other resistance members that are operating close to Outer Heaven. Each ally will specialize in specific subjects, helping out Snake with his mission. A reply will not be guaranteed however. The player will also need to remember what frequency each character is on to keep contact through the game.
The game begins with the player unarmed. Multiple firearms can be found while playing. These include a rocket launcher, grenade launcher, Ingram Mac-11, and Beretta 92F. The explosives that can be found are plastic explosives, landmines, and remote control missiles. Every weapon has a limited amount of ammo, and ammo can be refilled by finding additional supplies or ammunition caches. A suppressor is also available in the game that will allow the handgun or machine gun to be fired without making noises. Not only are weapons used to defeat enemies, but they are also used to destroy obstacles like a hollow wall and an electric fence. If the player want to save ammo or is out, they can defeat enemies by punching them. There will be mercenaries that will confront Snake, engaging in a battle. These are boss characters.
In the NES version, the enemies’ base will consist of five buildings instead of the MSX2’s three. The basements in Building 1 and Building 2 of the MSX2 version were made separate into the NES’s Building 4 and Building 5. These two buildings are reachable when the player goes through one of the two jungle mazes that are located outside the areas between Buildings 1, 2, and 3. The player will unlock doors using certain items and key cards to navigate new areas. Every door will need a specific key card to be opened. The buildings will have hostages that can be rescued to give the player information. When the player rescues five hostages, their ranking increases by a star, with the max being up to four stars. This allows an increase in maximum health and carrying capacity. If any hostages are killed, the player’s rank will decrease a rank.
The NES version also uses a passcode system. If the player is killed, they are given the choice to keep playing from the previous checkpoint or stop playing. If the choice is to stop playing, a password will be given. The passcode will keep track of the player’s rank, hostages rescued, bosses defeated, inventory, and specific event flags. The rank of the player will determine his checkpoint. If the player types in "f*** me" and puts a "1" in the rest of the spaces, it will send the player straight to the last battle, but without any equipment.
UPC: 0-83717-12001-8
Platform: NES
Players: 1
Condition: Used
Genre: Action and Adventure
Region: NTSC (North America)
Rating: Everyone 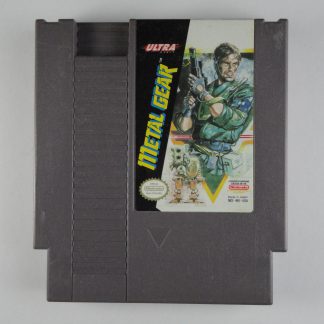