View cart “BurgerTime NES” has been added to your cart.

Monster Party NES Game Cartridge
Monster Party was released for the NES in 1989. The game is relatively obscure, having a little following by some players. The game is a parody and plays homage for pop culture in horror. It features locations and enemies based on horror icons and has parodic reinterpretations. It is also remembered by critics and fans for the bizarre premise it had. The content of horror that was allowed in the game had people puzzled because of Nintendo’s strict censorship policies back in the 80’s and 90’s when it was released. Some of that content included a large amount of blood and the word hell being used.
The story revolves around a kid named Mark. One day while going home from a game of baseball, he is approached by a gargoyle looking alien with wings called Bert who is looking for someone to assist him in killing the evil monsters in his realm, the Dark World. Mark is the first human Bert encountered and tried enlisting him to be his aid for battle. Mark was hesitant to help him, so Bert explained that anybody would work, even a younger Batter like himself. He then showed Mark that his bat is easily a good enough weapon for fighting his enemies. Bert quickly take Mark with him to the Dark World, and on the journey there, fuses with Mark to become a single being, giving Mark the capability of transforming into Bert for a short time.
The plot introduction and bizarre premise sets up the game to be full of variations of traditional horror themes and characters, with some of the themes with a type of ironic twist. Some characters are also relatively novel on their own. There are bosses that are traditional like The Grim Reaper, a Dragon, Medusa, zombies, giant spiders, and a mummy. There are also many enemies that came from Japanese folklore and urban legends, like jinmenken, which are dogs with human faces, and Bancho Sarayashiki’s well. The game has several unique enemies that are featured. These enemies are a giant talking caterpillar, some walking pants, a large cat that will hurl kittens at the player as projectiles, and fried shrimp that bounces around.
The player will take control of Mark who is wielding a bat for attacking enemies and reflecting their projectiles. Reflecting projectiles at bosses is necessary quite often due to Mark’s limited attacks. Enemies will drop hearts that will refill some life. They will also drop pills that transforms Mark into Bert for a short time. Bert can shoot beams and fly. Bert’s beams are stronger than Mark’s bat, and the beams will improve as the player finishes levels, which there are eight. Each of the levels have their own password that will allow players to go to a certain level without having to start the whole game over. The primary objective in every level is defeating certain bosses to get a key to move on into the next stage. The bosses are in doorways that the player can find in the level’s primary part. Each door will either lead to a boss or nothing. Even if there is nothing, the player will receive a "?" item that will give him points, health, or a transformation into Bert.
If the player makes it through the Dark World, Mark will ascend into some Heavenly type realm. This is where Mark fights the Master of the Dark World. When the player defeats the Master, Bert’s realm becomes free of evil monsters, and returns Mark back home, leaving him a parting gift for helping. Mark opens the box to see a gorgeous princess emerge. However, after only seconds, the princess transforms into a grotesque monster, melting Mark’s flesh off his bones. Mark then wakes up suddenly with his body normal. He believed his journey to the other realm was nothing but a dream. He then prepares to go to school, only to find Bert at his front door. Bert is holding Mark’s bat, then asks Mark is ready for it again, ending the game.
UPC: 0-45557-07400-5
Platform: NES
Players: 1
Condition: Used
Genre: Platformer
Region: NTSC (North America)
Rating: Everyone 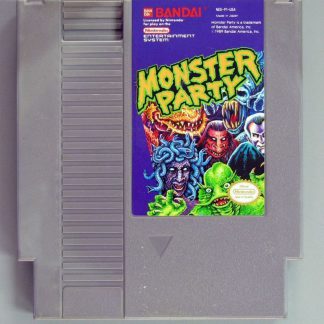