Side Pocket NES Game Cartridge
Side Pocket was released for the NES in 1987. It was developed and published by Data East. The game was originally released for arcades in 1986. Two sequels and a series spin off titled Pocket Gal were spawned.
The main gameplay mode, pocket game, required the player to cleat every ball off of the table within a certain amount of shots, including them achieving a score that is predetermined. The player will earn points when they sink a ball, sink balls with consecutive shots, and when the player sinks the balls numerically. Sometimes one of the pockets will start to light up. When this happens, the player can sink a ball in that pocket during that shot to earn a bonus, either being extra shots or points. While playing pocket game with two players, the game will play similar other than two people taking turns. If a player fails to pocket one of the balls or scratches, game control will change to the opposing player. There will also be a nine ball two player mode.
There will be various challenges for trick shots available for the player, earning them extra shots or additional points if the player was able to sink all the balls into specific pockets using one shot. The player is able to put a variety of spins on a ball like right and left english. They will also be able to perform masses.
UPC: 0-13252-00209-8
Platform: NES
Players: 1-2
Condition: Used
Genre: Sports
Region: NTSC (North America)
Rating: Everyone 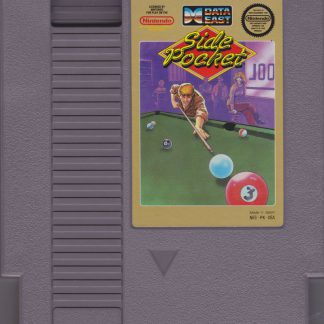