Silent Service NES Game Cartridge
Silent Service was released for the NES in 1989. It was published and developed by MicroProse. The game is a submarine simulator and was one of MicroProse’s best selling games. It was praised for the realism though it did not have any save features. The game’s setting is World War II and the player controls a submarine from the U.S. in the Pacific Ocean, trying to stop war patrols with Japan’s shipping. Key factors the influenced the game design were the theater’s size, the tactical situation variety, and the evolving technology like torpedoes that would or would not leave bubble trails on the water surface and a surface radar. Simulators only had access to that after being introduced in real life. Things like firing, damage repair, and navigation were put in different screens for allowing players to access a lot of information but focus on the current task simultaneously.
The player will have the choice of when attacking is best and a large range of real tactics can be used. These tactics include an End Around and the submarine can almost have invisibility if they stay low profile at night. The realism however was diminished some due to only being able to handle four or less projectiles at once. This made the game hard when the player was in battle with multiple destroyers because their submarine could not fire if there were already four torpedoes under water. Real time is accelerated when not combating.
UPC: 4-73109-76725-7
Platform: NES
Players: 1
Condition: Used
Genre: Simulator
Region: NTSC (North America)
Rating: Everyone 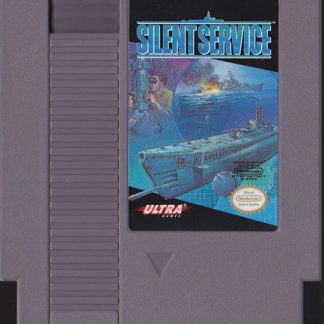