Skull and Crossbones NES Game Cartridge
Skull &amp; Crossbones was released for the NES in 1990. It was developed by published by Tengen. The game was originally released in the arcades in 1989. The character player one uses is One Eye and player two used Red Dog. They are both pirates on an adventure to find the wizard that kidnapped a princess. There will be seven pirate and non pirate themed levels in the game, with levels one through six being able to be chosen in any order. These levels are Pirate’s Ship One, Pirate’s Ship Two, Pirate’s Ship Three, the Beach Cave, the Spanish Castle, and One Eye’s Ship. When the player completes these levels, they will go to level seven, the last level, being Wizard’s Lair. The two player mode will be split screen.
Both player’s pirates will behave in the same manner and will face either right or left, being able to turn when needed. The button for using the sword can be for blocking and using the D-Pad in addition will throw a variety of attacks, stabs, and thrusts. A red X will appear often that denotes cranks and jumping. The player can dig up white crosses using the button for their sword to find a variety of treasures. There is also a parrot that belongs to a pirate that will constantly fly with players, reciting around twelve lines that are different nonstop.
The pirates have several weapons for fighting like their fists, knives, swords, and pistols. During every level, the player will need to kill a minimum of fifteen enemies to progress and fight the boss of the current level. Each of the six different levels will differ in the amount of time given to beat it. Many flags will be spread throughout the levels that are hiding new weapons, booty, and traps. There will be hidden flags that appear as a pirate passes them by. At every level’s end, a player can use their collected booty to buy new weapons, with the stronger ones costing more.
Every pirate ship level will have a boss Pirate Captain at it’s end. There is also a woman on each pirate ship referred to as wenches and seem to not provide any benefits for the game. The three other levels will have a Heavy Hitter Executioner, a Fast Attacking Monk, and a Turret Medusa boss for the levels they represent. Medusa’s attacks are able to be avoided completely when the player faces the other direction and uses back stabs. If the player chose the easy difficulty, there will be a hint on screen that advises them to not look at the Medusa. While in the Lair of the Wizard, those last three bosses mentioned will be encountered again in that order. The player who picked up the item for invulnerability on the boss’s respective stages will instantly regain the item’s use for a short time.
The Wizard at level seven’s end appears at one side inside the room, launching wizard balls that will stun a player. When the wizard is attacked, he teleports to another side and will continue. After the wizard is hit several times, the player beheads him and is then given the chance of picking up last second items of wealth before ending the game.
UPC: 0-31763-05012-4
Platform: NES
Players: 1-2
Condition: Used
Genre: Action and Adventure
Region: NTSC (North America)
Rating: Everyone 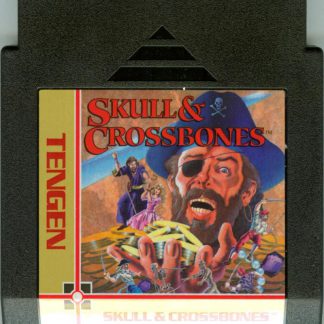 You're viewing: Skull and Crossbones NES $29.99
Add to cart