Soccer NES Game Cartridge
Soccer was released for the NES in 1985. It was part of the Sports Series for the NES. Intelligent Systems developed the game and it was published by Nintendo. The magazine Computer and Video Games said Nintendo’s Soccer was a part of the best soccer games among all consoles. The idea of Soccer was trying to kick a ball into the opposite goal, like in real soccer. Cheerleaders are present and the player has the choice between 15 minute, 30 minute, or 45 minute halves. Pressing B will pass the ball and pressing A will shoot at the goal. The seven teams the player can choose from are BRA which is Brazil, ESP which is Spain, FRA which is France, FRG which is West Germany, GBR which is Great Britain, JPN which is Japan, and USA which is the United States.
When starting a game, the player will choose either single player or two players. Single player will be against the CPU and has five different difficulty settings. Then the player will choose one of the seven teams and set the time limit desired. The game will start center field, with the view of the field being horizontal, panning left and right while playing. The player that is the closest to the soccer ball will control it and be able to kick it when "A" is pressed. There is also an indicator that will show the closest teammate that is going the same direction the player is. The player can receive passes from his teammates. Shots on goal are controlled with a meter that will represent the ball reaching above the head of the goalie. The player will automatically control their goalie when there is a shot toward their goal.
UPC: 0-45496-63013-3
Platform: NES
Players: 1-2
Condition: Used
Genre: Sports
Region: NTSC (North America)
Rating: Everyone 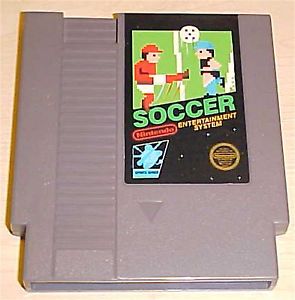