View cart “Spot NES” has been added to your cart.

Spot NES Game Cartridge
Spot: The Video Game was released for the NES in 1990. It was the first game to have the 7 Up mascot that was current at the time. The game was followed by two more games, Spot Goes to Hollywood and Cool Spot.
The gameplay was on a board that was 7×7 with some of the variations having locations on the board that were not available. The game could be up to four players that alternate turns. Each player will have a specific color for their pieces. Every turn a player will select a piece that is their color and an empty space that one square or two squares away. If the space is a single square away, the player will get a new piece in their color placed in the location. If chosen two squares away, the piece will move from the original place and into the new place. When a piece is moved, the game will have an animation. The character Spot will appear and roller skate, dance, a cart wheel, fall backwards, a dive, etc. to the new place, and what he does will depend on the direction and how far the move is.
UPC: 0-52145-80000-7
Platform: NES
Players: 1-4
Condition: Used
Genre: Strategy
Regioin: NTSC (North America)
Rating: Everyone 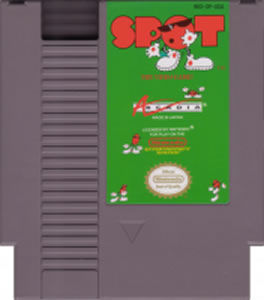