Street Fighter 2010 NES Game Cartridge
The game was set in the year 2010, which was futuristic the time the game was released. There was advanced technology where any person could travel easily from planet to planet with interplanetary warp gates. Ken retired from his fighting days after he won the Street Fighter tournament 25 years ago. Since then, he has become a scientist and is trying to develop a new kind of substance that is called Cyboplasm, which will give any organism that is living superhuman strength. Troy, his lab partner, is murdered and left inside a gelatinous material, and their Cyboplasm was also stolen. Ken then decides to pursue Troy’s killer after implanting bionics inside his body. He also implanted an interdimensional transporter so he could follow the murderer’s trail of Cyboplasm he left behind on every planet’s Frontier.
While controlling Ken, the player will go through stages with the objective of destroying a designated target that is shown before a stage starts while obtaining energy that is required for opening the transdimensional portal that goes to the following stage. Some of the stages will need to have more than just a single enemy destroyed to accumulate the required energy that is needed for opening the portal. When the portal is opened, the player will have a limited time to go inside of it. If not done in time, the player will lose a life and be forced to start the level over.
The player will have one button for attacking and the other is for jumping. Ken can climb poles and walls and can also climb and hang onto specific types of ledges. The player can have Ken do a back flip by performing a regular jump upward and then press the D-Pad the opposite way he is facing. The main weapon Ken has is a projectile of energy that he will launch with his hands. The player can shoot in either horizontal direction and vertically upwards by holding UP on the D-Pad. Curved shots can be launched by holding right or left on the D-Pad and then pressing B. These will have a longer reach and will be stronger than regular shots. The projectiles can also be launched diagonally upward with kicks when holding down on the D-Pad and then pressing B. A downward shot can be fired when Ken is doing a jump flip and then pressing B while in the air.
The projectiles Ken has will have a short range when starting the game, but power ups in capsules can be uncovered by the player when destroying the item containers that are spread throughout every stage. When two power ups are picked up by the player, it will increase the projectile one level, which will increase the range and the strength. If Ken receives damage, the power level of the projectile will decrease a level and if a life is lost, it will go back to standard power. The power jump that Ken has can be increased by five levels. Other power ups the player can get include an optional back up to add firepower and a shield capsule, which allows enemies to be damaged when the player is doing flip jumps toward them.
UPC: 0-13388-11012-4
Platform: NES
Players: 1
Condition: Used
Genre: Platformer
Region: NTSC (North America)
Rating: Everyone 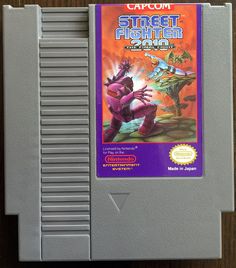