Super Cars NES Game Cartridge
Super Cars was released for the NES in 1990. It was developed by Magnetic Fields and published by Gremlin Graphics. The game was influenced by the another game called Super Sprint, and it spawned a sequel called Super Cars II. There are a total of 9 tracks with every track having 4 levels of difficulty. They can be raced in whatever order, but whichever is the last track will be harder than normal. When winning a race, the player will receive money that can be used on temporary upgrades for power and handling. Missiles for the rear or front that can knock other racers out and armor plating can also be purchased. The game starts with 4 computer racers but more will be added while progressing in the game.
There are three cars that can be purchased in the game. They include the Retron Parsec, Vaug Interceptor, and Taraco Neoroder, all being Turbo. All were based on real cars at the time. The Retron Parsec was similar to the Cizeta-Moroder V16T, the Vaug was similar to a Honda NSX, and the Taraco was similar to an Alfa Romeo SZ, with small changes.
UPC: 0-23462-85108-9
Platform: NES
Players: 1
Condition: Used
Genre: Racing
Region: NTSC (North America)
Rating: Everyone 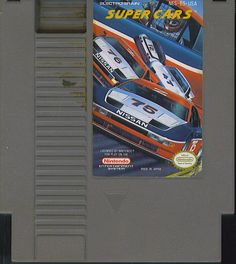