View cart “Rygar_NES” has been added to your cart.

Super Mario Bros Nintendo NES Game Cartridge
Super Mario Bros was released for the NES in 1987. It was developed and published by Nintendo. The game is Mario Bros’s pseudo sequel. A poll from IGN in 2005 named the highly influential and pioneering game the greatest video game of all time. It considered it helped aid the resurrection of the gaming industry after it crashed in America during the 80’s. The game also served to popularize the sub genre of side scrolling even further during the mid 80’s. On top of the game’s definitive features, it sold an enormous amount of units, selling more than 40 million copies. It was a single platform’s best selling video game ever for almost three decades, with Wii Sports on the Nintendo Wii eventually taking the title. The major success of the game had Nintendo port it to almost all of their major consoles.
The player will take control of Mario, the game’s main protagonist. Luigi, his younger brother, can only be played by a second player in multiplayer mode, assuming the same functionality and role as Mario. The game’s objective is racing through Mushroom kingdom, survive the forces of Bowser, the game’s main protagonist, and rescue Princess Toadstool. A player will move from the screen’s left to the screen’s right to reach a flag pole in every non castle level. The game will have eight worlds and every world has four levels. The last stage of every world will take place inside a castle that Bowser or a decoy of Bowser is located. The game will also include stages with Mario going underwater, containing different types of enemies.
There will be secret areas and bonuses within the game. Many of the game’s secret areas will contain extra coins for the player to collect, while some will have warp pipes the player can use to progress to a later world than the current one being played, skipping over the earlier ones.
The game will have coins scattered about for the player to collect. The special bricks that are marked with a "?" symbol could reveal a specialty item or more coins when Mario hits the bricks from underneath. Other secret bricks that are often invisible may have rare items or more coins. If a player obtains a yellow and red Super Mushroom, they will grow twice the size and be able to take an extra hit when touched by most obstacles and enemies. Mario will also be able to destroy bricks by jumping into them from underneath. The player will start with a specific amount of lives, with extra lives being gained from picking up orange and green 1-Up mushrooms, defeating many enemies in succession with a shell from a Koopa, collecting a hundred coins, or jumping on enemies and bounce successfully without landing on the ground. A life will be lost when the player is hit while small, the timer runs out, or falls into a pit.
The primary attack Mario has is jumping onto enemies, with some of the enemies having different responses to being jumped on. A Goomba, for example, will be flattened, defeating the enemy, while Koopa Troopas will retract into their shells temporarily which will allow the player to use the shell for a projectile. The shells will be able to deflect off walls and destroy the other enemies. They can also hurt or kill Mario once they bounce off a wall. To attack the enemies standing above Mario, the player will need to jump from underneath the brick the enemy currently is on. The Fire Flower will change Super Mario’s outfit color when it is picked up, allowing the player to launch fireballs. If the player is the regular, small Mario, it will upgrade him to just the Super Mario. A rare item the player can find is a Starman, which will appear when the player hits specific blocks that are concealed or invisible. The item will make the player invincible temporarily to most of the hazards and they will be able to defeat enemies on contact.
The game’s Minus World is a glitch in the game that is unbeatable. World 1, Stage 2 will have a secret warp zone that will transport a player to either World 2, World 3, or World 4. They can be accessed when the player runs over the wall close to the exit. A bug can be exploited by a player that will allow Mario to move through some bricks, which will have them pass through a wall. The warp zone that leads onto World 4-1 could instead transport a player to the stage that is called World -1. The map of the stage will be identical to World 2-2 and World 7-2. When the player enters the stage’s war pipe when getting through the stage, it will take them back to the level’s beginning, therefore trapping a player inside the stage until they lose all their lives. Though the name of the stage shows -1 at the top of the screen’s display, the stage actually is World 36-1.
UPC: 0-45496-63014-0
Platform: NES
Players: 1-2
Condition: Used
Genre: Platformer
Region: NTSC (North America)
Rating: Everyone 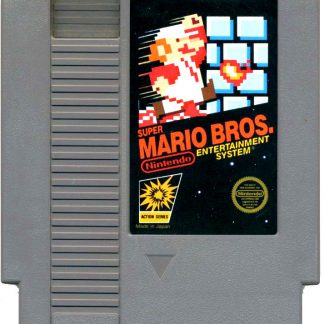