View cart “Hydlide NES” has been added to your cart.

Swords and Serpents NES Game Cartridge
Swords and Serpents was released for the NES in 1990. Interplay Entertainment developed the game and Acclaim published it. During gameplay, the player will take control of a party with four adventurers to go on a quest of dungeon crawling to destroy the terrible serpent. While on the quest, the party will encounter a lot of monsters and will be able to collect treasure and gold while obtaining experience points that are needed to increase their attributes. The game will focus mainly on the gameplay and will not have very much plot development.
The game can be played up to four players, with an NES Satellite or Four Score needed for the four players. The characters being controlled will be divided evenly with the amount of players. However, one player will need to be chosen to be the leader of the party who controls the navigating throughout he game. When a game is started, a player will create a party with four adventurers, with each character’s class needing to be picked between a warrior, a thief, or a magician. The player can have their statistics randomly generated or they can have a party prefabricated that will include a character from every class plus an extra magician. Continuing a game will require a player to record or remember five passwords to input later. One password is needed for every character and the fifth password is for the overall progress in the game.
Gameplay will be simple. A player will navigate through a dungeon with a representation that is crude. It will be presented with a format of split screen, allowing a player to view the game’s dungeon from the first person view and a map of the game’s current level that shows the location of the party. The monster encounters will occur randomly and sometimes in certain locations. During an encounter, the map will be replaced with gauges that represent the monsters’ health. While fighting enemies, a player will control the characters and have them attack, cast a magic spell, or run away. The whole game will take place inside a dungeon that is underground. The dungeon will consist of 16 total levels with a serpent at the dungeon’s end.
UPC: 0-21481-10305-9
Platform: NES
Players: 1-4
Condition: Used
Genre: Role Playing
Region: NTSC (North America)
Rating: Everyone 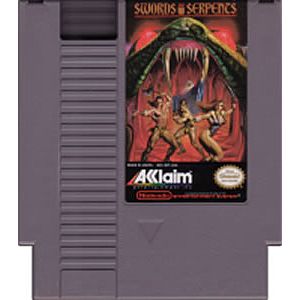 You're viewing: Swords and Serpents NES $19.99
Add to cart