Taboo NES Game Cartridge
Taboo was released for the NES in 1989. Rare developed the game and Tradewest published it. The game will give players tarot readings where a dealer will automatically shuffle the cards. Taboo is the NES’s only game that carries two warnings. One is that the game is meant for people of age fourteen and up, and the second is Taboo is meant for entertainment use only. It was marketed to be a party game for multiple adults to enjoy at the same time.
When the game loads, the player will need to enter their name, gender, and birth date. The game will then ask the player to enter a question. Once that is done, the cards will be shuffled. Using a layout of Celtic Cross, the game will then generate the player’s tarot reading. These cards may be reversed or normal. After that, the player will choose the state they are from and the game gives them lottery numbers. The whole deck of tarot cards will be used, consisting of the Major Arcana and Minor Arcana, totaling 78 cards.
The game’s instruction booklet will give a brief history of Tarot, meaning and origins. The booklet will also list both of the arcana and will list the names of every card. There will be further detail about the layout, including what every position on a Celtic cross will mean. There will be no other game activity found besides the repeated readings. There is also religious images and nudity in the game, which both were usually not acceptable under the guidelines of Nintendo of America.
UPC: 0-31719-19885-6
Platform: NES
Players: 1
Condition: Used
Genre: Other
Region: NTSC (North America)
Rating: Teen 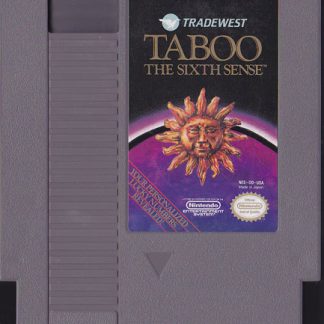