Tag Team Wrestling NES Game Cartridge
Tag Team Wrestling was released for the NES in 1986. It was developed by Sakata SAS and published by Data East. It was originally released for the arcades in 1983. The NES game had two tag teams that were professional wrestlers, Ricky Fighters and Strong Bads. These two teams battle with each other in two player mode. In single player mode, the player will compete in tournaments in series for ever larger trophies. The team Strong Bads gave the basis of Strong Bad, a character on Homestar Runner, a popular website. The website had popular obscure culture references from the 1980’s. Strong Bad, who is an animated character on Homestar Runner, had his fame based from the style of a Lucha Libre fighter from within the game.
Since the game is 8-bit, there are a limited amount of characters and wrestling moves. Counters and moves are performed with real time use of a menu based fighting module, having it an action reaction fighting style. When the player engages a grapple on another wrestler, they will scroll quickly through a list to choose a wrestling move to perform. All four characters will have a unique wrestling maneuver that they can use once on another rival wrestler.
Like most of the wrestling games during this time, when a player was pinned, they had to push buttons rapidly to kick out. There was not a limit on the amount of times a player could be pinned, however. If the player could push buttons quick enough, they could never lose. Most of the wrestling games had a system where once a wrestler was pinned a certain number of times, they could not just kick out. The NES controllers that had the rapid fire would make a player unbeatable, therefore a game would be able to be played forever since the mode for tag team didn’t seem to have an end.
UPC: 0-13252-00205-0
Platform: NES
Players: 1-2
Condition: Used
Genre: Sports
Region: NTSC (North America)
Rating: Everyone 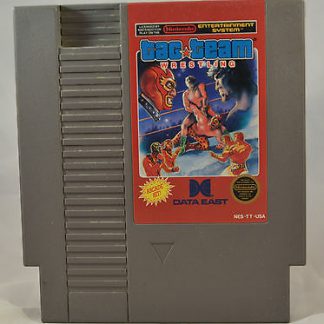