Teenage Mutant Ninja Turtles 2 The Arcade Game NES game Cartridge
Teenage Mutant Ninja turtles II: The Arcade Game was released for the NES in 1990. It was developed by Konami and published by Ultra Games. It was originally released for the arcade in 1989. The NES game was followed by two sequels, with the third game of the four being exclusively for the NES. The player will choose one of four Turtles, which are Raphael, Donatello, Michelangelo, and Leonardo. Shredder kidnaps April O’Neil and Splinter, their friend and mentor, respectively. The player will need to chase down Shredder, save their allies, and then defeat the Shredder. The game can be two players simultaneously. Donatello will have longer range but slower attacks, Raphael and Michelangelo have a short range but faster attacks, and Leonardo will be will rounded with average speed and range.
While playing the game, the player will be able to jump with a button and attack with the other button. There will be combinations possible when attacking. A player is able to throw a Foot soldier over their head, and when the attack and jump buttons are pressed together, the player will perform a special attack. Raphael will roll on the ground, finishing with a kick. The other Turtles will do a sweep jump attack using their weapons. There are specific areas the player can sring off a wall. The player can defeat an enemy quickly when they slam them into a solid object or wall. Many objects like fire hydrants, parking meters, traffic cones, and exploding oil drums are able to be damaged or hit by the player to help in defeating close by enemies.
Most of the enemies in the game the player will fight will be foot Soldiers. They will wear different colored uniforms, depending on the weapon they are carrying. The Foot Soldiers wearing purple clad, which are the most common of the soldiers, will have the ability of holding a player from behind, which will drain the player’s health and leave them open for other Foot Soldiers to attack. The bosses will include Bebop, Rocksteady, Baxter Stockman, General Traag, Granitor, Krang, and also Shredder.
The NES version will have two brand new levels, being part one of stage 3 and every bit of stage 6. They will feature new enemies and two new enemy bosses. These new bosses are Tora, who is a blizzard beast and dog like, and Shogun, who is a samurai that is robotic. Both characters were created for the NES game. The majority of stages were extended from the arcade’s version, including stage 3’s second half. That second half of stage 3, which was the parking garage, replaced the end battle from the arcade that had Rocksteady and Bebop with the mutated form of Baxter Stockman, that was a fly. The game on the NES also had obvious advertising using product placement, which were Pizza Hut logos. The original game manual included coupons for Pizza Hut.
UPC: 8-02859-00114-2
Platform: NES
Players: 1-2
Condition: Used
Genre: Beat’em Up
Region: NTSC (North America)
Rating: Everyone 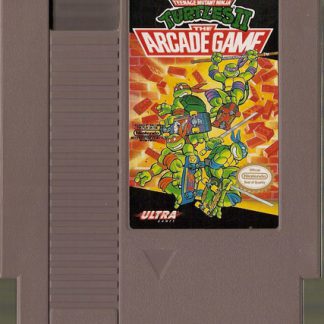