Tennis NES Game Cartridge
Tennis was released for the NES in 1985. It was developed and published by Nintendo. It was a part of the 18 games that launched with the NES. The game was embedded within Animal Crossing that was released in 2001, which is a game of life simulation. It is also featured in WarioWare: Twisted that was released in 2004 as a minigame.
The game can be single player where the human plays a computer, or two player, where two humans play one on one. There will also be double matches having cooperative or competitive play. The player will control their tennis player with the D-Pad, and the A button will be low hits and the B button will be high hits. There will be five computer difficulty levels. An assortment of hits will be available, which include a backhand and forehand, lobs, and then volleys when the player is close up on the net. Mario makes a guest appearance as the referee for the tennis matches.
UPC: 0-75470-39028-9
Platform: NES
Players: 1-2
Condition: Used
Genre: Sports
Region: NTSC (North America)
Rating: Everyone 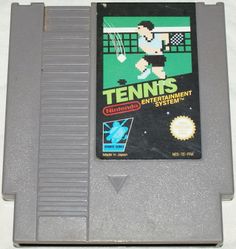