View cart “Dr. Chaos NES” has been added to your cart.

The Battle of Olympus NES

The Battle of Olympus NES Game Cartridge
The Battle of Olympus was released for the NES in 1989. It was developed by Infinity and published by Broderbund. The game has similarities to Zelda II: The Adventures of Link. It takes place during ancient Greece that Hades, the underworld dark ruler, is terrorizing. Orpheus’s girlfriend Helene has been kidnapped by Hades and is holding her in captivity. A Greece map that is top down will show ancient city-states from Greece and a variety of dungeons the player can visit during their quest. Crystals, shields, and swords will help provide defensive strength and offensive power for a player. There will be three love fragments that reminds Orpheus of Helene. The dominion inside Tartarus is ruled by Hades, having his most powerful minions living alongside him.
During the adventure, the player will need to gain the favor of Greek gods, beginning with the Olympian god leader, Zeus, who then encourages other Olympian gods to give Orpheus powers. The powers will be in forms of a shield, a sword, and other equipment like a harp that can summon Pegasus to take the player to far off locations. As progression of the game goes on, the player will be exposed to a variety of upgraded weapon forms. The player begins with a regular club that is made of wood. They will later obtain items like Fennel’s Staff, which is also called a thyrsus, letting the player launch fireballs at enemies. Other items in the game are Divine Sword, which can launch lightning bolts at enemies, and Nymph’s Sword.
The game will feature mythological creature encounters like a Siren, Nemean Lion, Stymphalian Birds, Cerberus, Medusa, Minotaur, Talos, Centaur, Cyclops, Lamia, and Taurus. The player will need to fight to get to the underworld, find Hades to defeat him, and then rescue Helene. There are many items that are depicted from Greek mythology the player can obtain like Apollo’s Harp, Hephaestus’ Sword, Prometheus’ Staff, and Hermes’ Sandals.
UPC: 0-78915-01910-3
Platform: NES
Players: 1
Condition: Used
Genre: Action and Adventure
Region: NTSC (North America)
Rating: Everyone 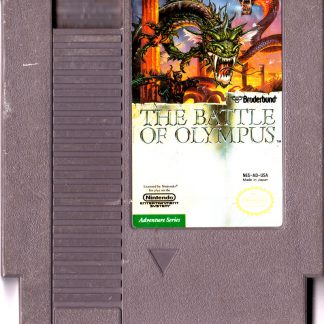 You're viewing: The Battle of Olympus NES $19.99
Add to cart