The Three Stooges NES Game Cartridge
The Three Stooges was released for the NES in 1989. It was developed by Incredible Technologies and published by Activision. The television show with the same name is what it is based on. During gameplay, the players will control Curly, Larry, and Moe to try and raise enough money so they can save the orphanage.
The designer of the game, John Cutter, made it portray similar to a board game. The player will need to save the old lady’s orphanage by getting money in the minigames that will be based on a variety of Three Stooges movies/films. They will include a contest for cracker eating, which is from their Dutiful but Dumb short, and some boxing matches which is from their Punch Drunks short. The player will choose the minigames using a timed button press while a hand will randomly point to a variety of symbols that will represent events in the game. This will also include events that are non interactive which are able to lower or raise the player’s cash total. Every event will take one game day, and the players will have 30 game days to get the most money they can.
The hand will speed up gradually every day. It can slow down if the hand lands on the space that will allow Moe to pummel Curly and Larry. The player will need to avoid the mouse trap spaces because it will injure the hands fingers. If those spaces are landed on four times the game will immediately end, no matter what amount of days have passed. There will be many endings possible that will depend on the player’s money amount they earned. The endings range from the orphanage being foreclosed on by the banker if not enough money was collected for paying rent, to the orphanage being renovated and saved while the Stooges end up marrying the three daughters of the owner.
The game will include some humor, with the game loading up as The Ghostbusters II with music and the splash screen. The three stooges then walk onto the game screen, with Curly saying they are in the wrong game, Larry saying it looks like a game for kids, and then Moe calls them imbeciles and smacks them, with Curly screaming OH!
UPC: 0-47875-70009-3
Platform: NES
Players: 1
Condition: Used
Genre: Action and Adventure
Region: NTSC (North America)
Rating: Everyone 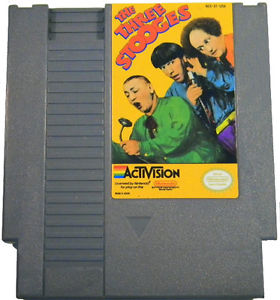